Recently, our South East Asia Coordinator in the CORE Group, Dr Naren Nallapeta wrote an excellent advocacy article on Safe and Sustainable Transport in the 30th Edition of the International Federation of Medical Students Association (IMFSA) magazine entitled MSI - Medical Student International. This magazine is sent out to the IMFSA's one million plus medical student network bringing further attention to the cause.

For more than 60 years, IFMSA has existed and been led by medical students worldwide. The International Federation of Medical Students’ Associations (IFMSA) was founded in 1951. It is the world’s oldest and largest independent organization representing associations of medical students internationally. It currently maintains 108 National Member Organizations from more than 100 countries across six continents with over 1,2 million students represented worldwide. IFMSA is recognized as a non-governmental organization within the United Nations’ system and the World Health Organization and as well, it works with the World Medical Association.

With Naren's permission, we publish his article here.

I lost my daughter, Zenani when she was only 13. In a matter of seconds, her world and her future was destroyed. And with her, a huge part of my world was gone too. For the sake of all our children, for our world and the future we want, we must make sure we include road safety this time round. Zoleka Mandela

Safe mobility should be a right to all. Like access to education, drinking water and provision for health care, safe road transport must be a key foundation of modern society. Even today we see an enormous population, especially in the middle and low income countries with roads having no adequate footpath; car companies which do not comply with the United Nation’s basic crash test standards designs, Governments which fail to enforce speed limits, drink-driving, seat belt use or motorcycle helmet wearing.

Road traffic injuries are a global, man-made (and preventable) epidemic with a health burden on the scale of HIV/AIDS and Malaria. There is a significant and serious impact of road traffic injury on global mortality and disability which has been confirmed by 2 new studies – the WHO Global Status Report on Road Safety 2013 and the Global Burden of diseases(GBD) 2010. The reports suggest a staggering overall number of annual deaths on the world’s roads at almost 1.3 million deaths.

The vast majority of casualties occur in middle and low income countries which are experiencing rapid motorisation. Around half of those killed are pedestrians, cyclists or motorcyclists, who are often among the poorest members of society.

The UN Decade of Action for Road Safety 2011-2020 is promoting cost effective solutions proven to reduce road casualties. Improving road design and vehicle safety; implementing motorcycle helmet and seat belt laws; and effective police enforcement have all succeeded in reducing death and injury in low, middle and high income countries alike. But many governments and international agencies must do more to prioritise road safety and integrate it into wider sustainable development agendas.Furthermore there is very limited international funding or policy support to catalyse national action plans and to help build capacity. Such catalytic international support is urgently needed.

In his recent report on the post-2015 development agenda, ‘A life of dignity for all: accelerating progress towards the Millennium Development Goals and advancing the United Nations’ development agenda beyond 2015’, UN Secretary General Ban Ki-moon recommended that reducing the burden of road traffic injuries should be one of the targets in a new health goal.

Few initiatives taken as a part of the UN Decade of Action for Road Safety by the world associations to reduce the burden of road traffic accidents:

Fédération Internationale de l'Automobile (FIA) and the Clinton Global Initiative: The Clinton Global Initiative (CGI) established by the former US President Bill Clinton, brings together philanthropies, Governments, companies and development and public health experts to collaborate on major social and health issues through, ‘Commitments’. The FIA Foundation, a UK-based philanthropy, has made three 10 year CGI Commitments totaling €30 million. The FIA Foundation’s commitments pledge support for key initiatives in support of the Decade of Action Global Plan.

A plague on the YOUNG: The global burden of road traffic accidents
New studies confirm that young people face their greatest risk of death or disability when travelling on roads and streets.

A Post-2015 Agenda for Mobility: Safe and sustainable road transport, the ‘Safe System’ speed management at its heart, must be a post-2015 priority.

The current debate on a future framework for sustainable development provides an opportunity to integrate safe and sustainable transport within the next set of development goals, and to establish new partnerships for safe, healthy and clean transport and urban development strategies, with road safety and effective speed management at their heart, which put people first.

Road safety must be recognized and included in the post-2015 Sustainable Development Goals framework. This should include reducing road traffic deaths globally by 50% from 2010 levels by 2030. This would be consistent with the current UN Decade of Action for Road Safety objective, endorsed by more than a hundred governments in UN General Assembly Resolution 64/255, to ‘stabilise and reduce’ road deaths by 2020.

In conclusion I encourage the Youth of IFMSA and all the member nations to support safe roads for all as a part of the journey towards “Sustainable Development for the New Era”. Like education and healthcare, safe roads should be a right to all. 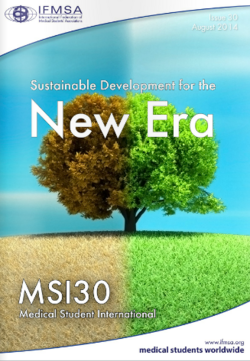 You can read Naren's article on page 23 of MSI30 here.