Zoleka Mandela joins MY World to celebrate its 5 million votes

Global road safety campaigner Zoleka Mandela has joined ‘MY World’, the UN’s major outreach initiative on the post-2015 agenda to celebrate reaching 5 million votes cast in the global public opinion survey for the new development goals. The world has been voting in 'MY World' as one of the biggest online consultations ever created.

Read the orginal story at the FIA Foundation's website.

MY World, which connects members of the public with the policy makers at the UN who are deciding the new priorities for global development, invited Zoleka Mandela to take part in the awards ceremony in recognition of her campaigning for road safety to be included in the post-2015 goals.

The awards ceremony was held alongside the opening of the UN General Assembly in New York. Zoleka joined senior figures from the UN, government representatives and civil society campaigners in presenting the awards to individuals and organisations which had made key contributions in the effort to gather the 5 million votes cast worldwide on all priorities so far.

She said: “It’s incredible to be a part of this enormous global movement to involve people in the new development goals. We have been campaigning for road safety to be part of the UN’s post-2015 agenda and MY World is such a powerful way of getting the message across to world leaders. Campaigners, groups and individuals worldwide have been voting on MY World in their millions, to tell the UN the priorities for the future they want. It’s a great honour to join our counterparts in other campaigns in being recognised by the UN for what is a massive collective effort.”

Richard Curtis and Zoleka Mandela at the awards, the MY World team celebrate 5 million votes.

Zoleka Mandela presented the MY World ‘Innovation Award’ to Aakash Shah, Founder of the Action for Pune NGO in India. He had collected over 600,000 votes for MY World among young people in Pune. Speaking at the event just before he received the award, he said: “We dispel the myth that young people are apathetic and don’t care about the future of our planet. In my hometown, Pune many thousands of us have taken the opportunity to tell world leaders what priorities we want. Road safety is actually one of our priorities at Action for Pune and it was amazing to meet Zoleka Mandela. We hope to take our campaigning forward with her in future.” 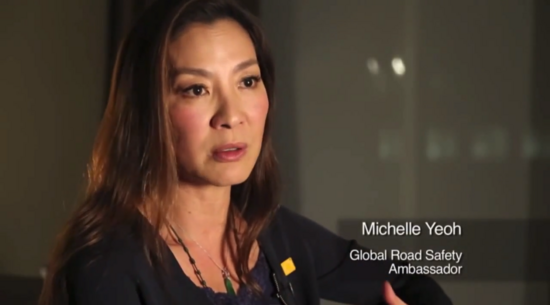 Al Jazeera journalist Femi Oke presented the awards ceremony. She was joined by a range of key figures working on the post-2015 agenda including: Amina Mohammed the UN Secretary General’s Special Advisor on Post-2015, film director and Founder of Comic Relief Richard Curtis who has been advising the UN on the MY World initiative, Ahmad Alhendawi, United Nations Secretary-General’s Envoy on Youth, Corinne Woods the Director of the Millennium Campaign, Haoliang Xu, Assistant Secretary General of the United Nations and Director of the Regional Bureau for Asia and the Pacific, UNDP, Paul Ladd, Post-2015 Development Agenda Team Lead, UNDP, Claire Melamed, Director of Programme, Growth, Poverty and Inequality, Overseas Development Institute and Jim Emerson, CEO of VSO International.

The FIA Foundation along with key partners such as the FIA and its member clubs are promoting MY World and encouraging people to include ‘better roads and transport’ in their priorities and to suggest ‘road safety’ as an extra priority. The campaign has been a key part of the effort to advocate for a target to halve road traffic fatalities to be included in the UN’s new post-2015 goals.