Youth on the Move: #ClaimingOurSpace - an interview with Omnia El Omrani

Friday, 26 June 2020, YOURS News via The Global Alliance of NGOs for Road Safety

Road traffic crashes are the number one killer of young people aged 15-29. At the opening ceremony of the 3rd Global Ministerial Conference in Sweden, Omnia El Omrani delivered a message to government Ministers and decision-makers around the world on behalf of the members of the World Youth Assembly and the thousands of young people from around the world who took part in youth consultations in the run-up to the conference. 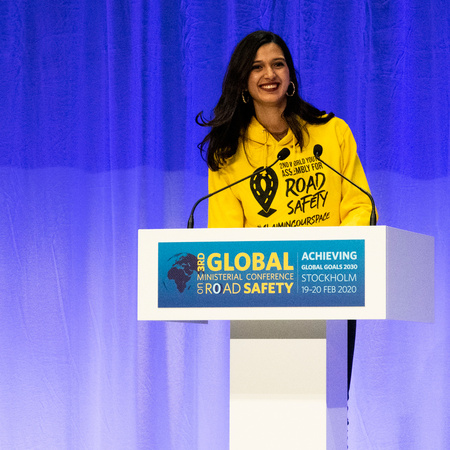 The Global Alliance of NGOs for Road Safety recently interviewed Omnia to learn more about the impact of her speech, what has happened since, and how the Global Youth Coalition will build on the momentum gained by the World Youth Assembly in Stockholm.

How did you get involved in road safety?
I started out working in Egypt with the national branch of the International Federation of Medical Students, an organization that represented medical students worldwide, as their Public Health Officer. I had a lot of opportunities to do advocacy for road safety and health and the health implications of road safety and road related injuries and awareness. I started working with my organization on a global level as the liaison officer for public health issues, so I am the focal point for non-communicable diseases, road safety and climate change.

Through them I applied to be a part of the World Youth Assembly taskforce. This has been the beginning of the journey to understanding the global road safety and safe mobility road safety areas, but always bringing in my perspective of health; saving lives and promoting health as well as planetary health.

Working with the youth taskforce has been an incredible experience. It is a group of really diverse individuals from different countries working towards the World Youth Assembly, the day before the Global Ministerial Conference. We had weekly online meetings, discussing what we wanted the assembly to look like. Each of us had a different task to focus on.

What was it like to stand up in front of all the Ministers and decision-makers at the opening ceremony of the Global Ministerial Conference?
It was a combination of feelings. At first, I was a bit nervous but the main thing that I felt was responsible because the speech that I was delivering was not just my stance, but the stance of the youth taskforce that has been working for the Assembly to make it happen and the thousands of youth that we took part in the youth consultations all over the world. Those consultations formulated the Global Youth Statement which was the outcome of the World Youth Assembly (WYA) attended by over 160 delegates. So, I really wanted to convey this message and make it strong.

We wanted the speech to show all of these Ministers, decision-makers, and policymakers in the room that we, as youth, know that road safety is the biggest killer in our generation and that young people are the biggest demographic – almost 60% of the world’s population – so road safety is a huge concern for us and for our future generations.

At the same time we wanted to show them that we have solutions, we have passion, ideas and innovation. We want them to work with us, to include us in their decisions and the policies that they are formulating. We wanted to create a space for us to claim our space because this is our futures; we are the generation that is going to be impacted. 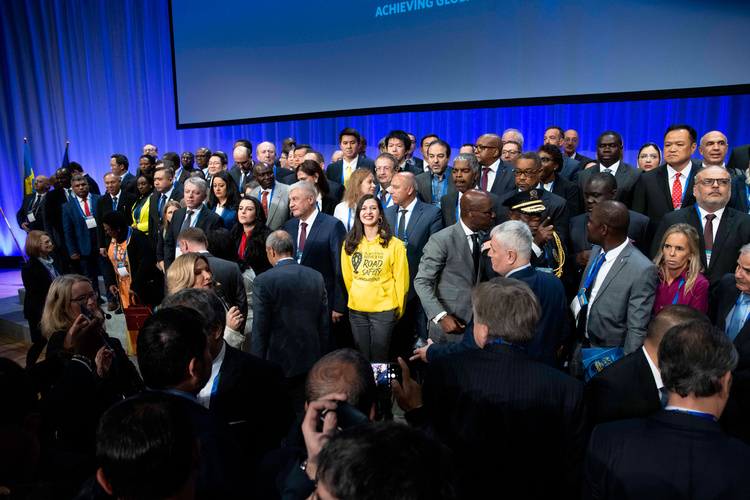 What was the reaction to your speech?
The highlight of the reactions that I received, and that I really cherish, are that many ministers and decision makers came to me and they would ask me “How can we engage youth in our country? We really want them to be there with us, to advise us.” They were all talking about how youth can be empowered to work with them.

Ministers would come and check out the Global Youth Statement, which is our main advocacy document. We wanted to create the space for the youth who couldn’t be with us, and to make it easier for them to go to their governments and to their ministers who had been at the Ministerial Conference.

Another highlight was that I met my own Minister for Transport [of Egypt]. That was inspiring, to have him talk to me about the speech and the youth statement. The African Union Commissioner [for Infrastructure and Energy], Amani Abou-Zeid, is from Egypt. She also came to me and said it was a great speech and that she would like to work with us and with the youth in the African Union on road safety.

At the same time, it was interesting to receive a lot of feedback from the youth themselves. We were all wearing the same hoodies so that when we went to sessions, we were approached a lot by the decision-makers who wanted to talk about how to engage further and how to follow up on the discussions that were happening during the Ministerial Conference back in their home countries.

What did you tell decision-makers when they approached you?
When decision-makers approached me, first of all, I would always have the youth statement with me, and tell them that this was based on consultations that were done by youth in their own countries. I would uplink up Ministers with members of the Youth Taskforce in their country so to that they could follow up back to their own country. I would explain to them what we did at the WYA and the delegates’ demands and commitments.

There are many youth organizations, and youth-led initiatives that really need the support of government and to include them meaningfully at the decision-making table and listen to their inputs.

As youth, we do not just have demands and commitments, we are the link between civil society and government. We know what is happening in society and through the initiatives we do, we can take all these opinions, the things that we hear, and the needs back to their governments.

What has been the impact so far: before, during, and after COVID-19?
So far, COVID-19 has not stopped us from working.

Youth Coalition
We are currently working on the Youth Coalition, which is the outcome of the WYA. We want to find a way to sustain the momentum, the energy, the ideas, and innovation that was seen at the assembly and to take it further empower the youth beyond the assembly. The launch will be in July. We plan to empower youth-led organizations to engage with their governments, claim their space at the decision-making tables and voice their opinions as well as advise them and empower the initiatives that they are working on. Youth-led organizations will be able to become members of the coalition and we will aim to link them with organizations that can support their initiatives. We will also focus on key priority events for advocacy.

The main goal of the coalition is to follow up on the Global Youth Statement and see how the goals, objectives and indicators can be accomplished.

Government engagement
Last week, we participated in a webinar with government decision-makers in Namibia. We had a discussion about how youth can be empowered and how can they be involved more.

This is just one example of countries developing their own youth coalition council or involving youth in their government-led road safety coalitions or councils.

Webinars and panel discussions
The Youth Taskforce has also held the ‘#ClaimingOurSpace Live!’, talking about what they have been doing during COVID-19 and a panel discussion about the opportunity that COVID-19 is presenting to create a new and sustainable world.

Read the original article at the Global Alliance Website