YOURS to attend World Conference on Youth - Sri Lanka

Our advocacy pillar has a clear goal; to ensure youth and road safety issues are placed high on international agendas around the world and given the attention it deserves as the number one killer of young people aged 15-29 globally. This is our strategy as a member of the United Nations Road Safety Collaboration and our continued efforts to push for road safety to be recognised as a Post-2015 Development Agenda focus.

World Conference on Youth 2014 will take place from 6th to 10th May, 2014 at Bandaranaike Memorial International Conference Hall in Colombo, Sri Lanka. WCY 2014’s Cross-cutting theme is 'mainstreaming Youth in the Post-2015 Development Agenda'. YOURS will be attending the event to bring road safety to the agenda and push for it to be included in the youth arm of the SDG.

The Conference has a unique aim of producing a joint outcome document between states and youth, the “Colombo Action Plan”.

Some of the objective of the World Conference Include:

Right to Safe and Sustainabe Transport
“We want to see targets, indicators and new partnerships to promote safe and sustainable transport included in the post-2015 ‘Sustainable Development Goals’. When road safety is lacking, development and poverty eradication objectives are undermined. Road traffic injuries are a burden on the poor and vulnerable and are the leading global cause of death among young people aged 15-29. By prioritising road safety we can create safer environments, reduce road traffic deaths and injuries and prevent millions of premature deaths”. 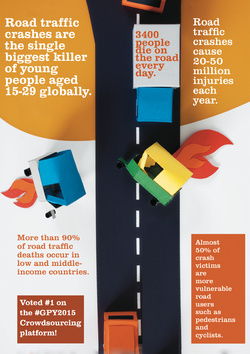 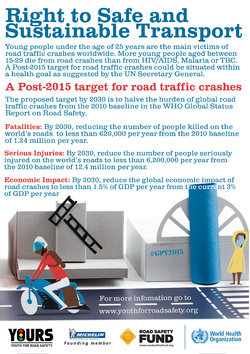 Proposed Target:
The proposed target by 2030 is to halve the burden of global road traffic crashes from the 2010 baseline in the WHO Global Status Report on Road Safety 2013.

Communications Officer and Coordinator of the Global Youth Network for Road Safety, Mr Manpreet Darroch will be attending on behalf of YOURS and representing road safety at the event. Follow him on Twitter for live updates.