YOURS facilitators in Belize continue to create big impact!

Back in 2014, CDB approached YOURS to run our signature programme to educate and inspire young people to take road safety action. This two year collaboration built a strong partnership from the ground up in Belize and was undertaken. Since then, the facilitators have continued to create a massive impact in the country by reaching their peers in their own road safety workshops, placing peer-education at the forefront at their approach. 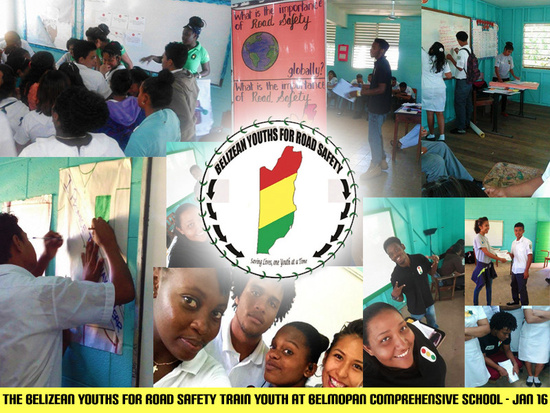 The year has kicked of to a great start in Belize with nearly 100 young people already reached in face-to-face workshops delivered by our facilitators in the country. This group was trainged by YOURS from 2014 through to 2015 and formed an organization called BYRS (Belizean Youths for Road Safety). The group, consisting of passionate and talented youth leaders have been reaching youth throughout their country with workshops, creative campaigning and talks, all with the aim of reducing the amount of crashes and deaths involving young people.

One of YOURS’ big successes in capacity development was the two year programme established in partnership with the Caribbean Development Bank (CDB) and Government of Belize (GOBZ). The training fits into the Bank’s wider all-encompassing road safety project, which focuses on improving Belize’s infrastructure, emergency response, enforcement and education.

Back in 2014, CDB approached YOURS to run our signature programme to educate and inspire young people to take road safety action. This two year collaboration built a strong partnership from the ground up in Belize and was undertaken in the following phases:

2014 Phase 1: building momentum and exploring local partnerships
In initiating the programme, YOURS undertook a country specific analysis, exploring key road safety issues facing the youth of Belize. We began with an inception mission to build a partnership of national and local partners including ministries in the country, local youth groups, university leaders and key statistical institutes. This mission created a promising objective; to recruit and train a group of skilled youth leaders aged 16-29 on road safety issues facing youth, with a view to reaching more than 2,000 youth face-to-face workshops across the country.

2014 Phase 2: training of facilitators (first cohort)
In the first cohort, 15 exceptional youth leaders representing the length, breadth and diversity of Belizean youth were brought together in Belmopan, Belize. These youth underwent the YOURS training experience; interactive, engaging, creative and evidence based, over an intensive two week period. The training  coupled road safety theory in a global and Belizean context as well as practical skills on delivering peer-led workshops. The training covered topics such as youth and road traffic injuries, the scope of the road safety problem globally and locally, distracted driving, speeding, alcohol and drug, how humans learn and peer education.

On completing the training, the 18 youth created ripples of road safety action. The youth establish their own NGO, the Belizean Youth for Road Safety (BYRS). In 6 months, they reached over 1,000 youth through their own road safety workshops and hundreds and thousands of youth with their creative campaigning. 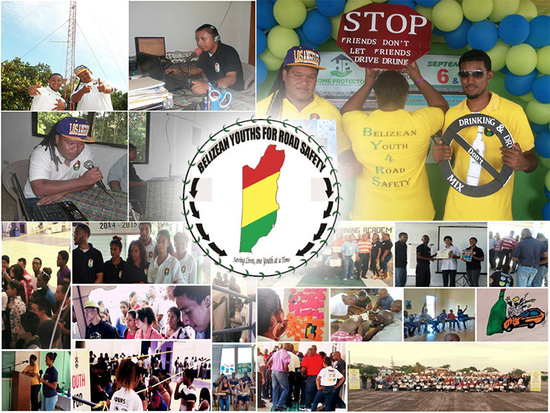 Read more about the training in Belize here.

2015 Phase 3: review, extra training and coaching
In early 2015, YOURS went back to Belize to review progress and offered additional ‘refreshment’ training on the road safety topics covered. Here, additional training such as Leadership and Teamwork also took place. The review visit saw the facilitators in action, offered coaching and planned for future workshops.

2015 Phase 4: training of facilitators (second cohort)
Following on, a second training of facilitators was undertaken with a cohort of 20 youth leaders. Here, cohort one played a significant role in orientating the group, delivered parts of the training as well as inviting them to join BYRS. On completion, cohorts one and two have continued to implement road safety workshops and have created a youth movement for road safety in Belize. In addition they also trained the new recruits of the police academy and have reached over 2,000 young people already.

2016 Phase 5: review, extra training and coaching.
In 2016, YOURS will return to Belize to review the both cohort’s progress and offer coaching to maximize the youths’ outreach efforts.

Get your own valid XHTML Vimeo embed code

Read more about our training in Belize