The objective of the GPY2015 partnership is to ensure that young people are actively participating in setting, implementing, and evaluating the new development agenda due to replace the MDGs in 2015. This partnership offers a unique platform for all stakeholders working on youth development to express their views, and help identify specific targets and indicators for youth empowerment, which could feature in the Post-2015 Development Agenda.

The ECOSOC Forum on Youth 2-3 June in New York is approaching fast. Building on input from over 1.2 million young people who voted in the MyWorld2015 survey, as well as the outcome of the crowdsourcing platform launched earlier this year, the United Nations Secretary-General’s Envoy on Youth Ahmad Alhendawi invites all youth organisations, including those who are among the 1,700 members of the Global partnership for youth in the post-2015 development agenda, as well as other partners, to endorse the Global call on youth in post-2015 ahead of the gathering in early June.

“Despite significant progress made since the Millennium Development Goals were adopted, the current generation of youth – the largest the world has ever seen – has been left behind. They are still denied the opportunities they need to realize their full potential,” stresses the Envoy.

Based on the five thematic priorities from the MyWorld2015 survey – Education, Employment and Entrepreneurship, Health, Good Governance, and Peace and Stability – the crowdsourcing platform is run in partnership with ITU, UNFPA, the UN Millennium Campaign, The Major Group on Children and Youth, ICMYO (International Coordination Meeting of Youth Organisations), and the Inter-Agency Network on Youth Development (IANYD). Drawing on the priorities identified in the above-mentioned online crowdsourcing exercise along with the results of recent global, regional and national youth consultations and meetings that have taken place in the context of the post-2015 development agenda process, a team of moderators from youth-led organizations and UN entities have synthesized their outcome and consolidated them into concrete youth-focused target areas, reflected in the Global call on youth in post-2015.

By endorsing the Global call on youth, your organization will appear in the list of organizations from around the world that stand behind the call for prioritizing youth in the Post-2015 Development Agenda. Your valuable support will strengthen the consensus: The more we are, the stronger our united voice will be and the better the chances for concrete youth targets to be rightfully included in the Post-2015 Development Agenda.

For the first time since dilberation and consultations began and our extensive lobbying at the World Conference on Youth and global support for our Crowdsourcing iniative, road injury as a special term has been included in the outcome document of Global Partnership on Youth 2015 which will feed into the talks in the ECOSOC Youth Forum and subsequent conversations on youth perspectives in the Post-2015 Development Agenda.

As the conversations continue, YOURS will be contuing the mission to have the biggest killer of youth, road traffic crashes, included as part of the youth priorities for the Post-2015 Development Agenda. 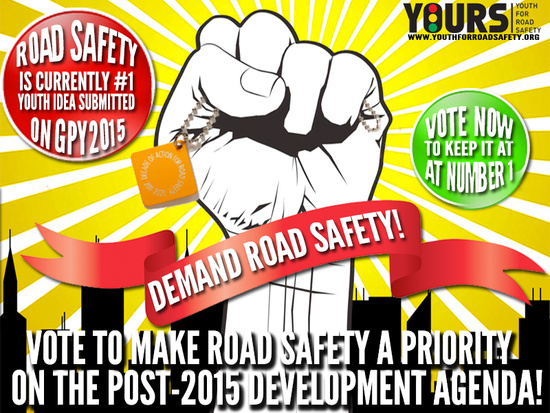 You can continue to vote for the Right to Safe and Sustainable Transport on the GPY2015 Crowdsourcing platform.