YOURS Ambassador Aakash featured in The Times of India

YOURS' Ambassador for the Post-2015 Agenda Mr Aakash Shah has recently been featured in India's biggest circular newspaper, The Times of India to bring awareness to his efforts across the world. Aakash joined the YOURS team recently to work on the infuencing the Post-2015 Agenda.

Read the original story here.
PUNE: Nineteen-year-old Aakash Shah has been chosen as the Global Ambassador for Post-2015 Development Agenda, by Youth for Road Safety (YOURS), which is part of the UN Road Safety Collaboration. In his role as the global ambassador, Shah is now working towards pushing all 193 permanent missions at the UN to commit to road safety goals set by the intergovernmental organisation and include these in their Post-2015 Development Agenda.

One of the goals in the agenda is to halve the number of road deaths by the year 2030.

The other objective of the advocacy project, which is being led by Shah along with the Global Alliance for Road Safety, is to push permanent missions to attend the second high level conference on road safety.

The meet will take place on November 18 and 19 in Brasilia, Brazil, and include a youth representative in each delegation. The global alliance represents NGOs from 90 countries that deal with road safety and works in collaboration with the World Health Organisation (WHO).

Shah has been working towards road safety since the last three years and is the founder of the youth NGO Action for Pune Development (APD). The NGO's first project was with the Pune traffic police in 2012.

Shah was also part of UN's Save Kids Lives campaign during the Road Safety Week in May. He managed to reach out to 8 lakh people across the globe through the campaign, which got people to sign a plea supporting road safety for children as a priority. 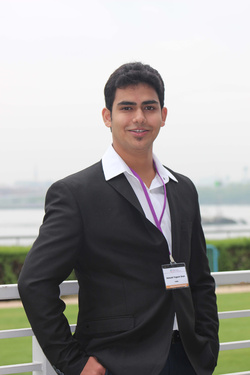 "The Child Declaration for Road Safety is a call for action. Children have voiced their thoughts and fears about traveling on roads and experts have summarised measures that must be taken to keep them safe on roads. These measures must become a priority for governments for future development," says Shah. Read Aakash's profile here.
APD has been given a grant of $2,000 by an organisation, Youth Service America (YSA), to execute its road safety project. On Septemeber 2, APD will train eight people at YASHADA for the same.