WHO calls for stronger focus on adolescent health - RTIs recognized

WHO's "Health for the world’s adolescents" report reveals that depression is the predominant cause of illness and disability for both boys and girls aged 10 to 19 years. The top 3 causes of adolescent deaths globally are road traffic injuries, HIV/AIDS, and suicide. Worldwide, an estimated 1.3 million adolescents died in 2012. This new report recognised road traffic crashes are the leading cause of death for young people the world over and a considerable health burden facing youth.

14 May 2014 | GENEVA - Drawing on a wealth of published evidence and consultations with 10 to 19-year-olds around the world, the report also brings together, for the first time, all WHO guidance on the full spectrum of health issues affecting adolescents. These include tobacco, alcohol and drug use, HIV, injuries, mental health, nutrition, sexual and reproductive health, and violence. The report recommends key actions to strengthen the ways countries respond to adolescents’ physical and mental health needs.

“We hope this report will focus high-level attention on the health needs of 10 to 19-year-olds and serve as a springboard for accelerated action on adolescent health.” Dr Flavia Bustreo, Assistant Director-General for Family, Women and Children’s Health, WHO

“The world has not paid enough attention to the health of adolescents,” says Dr Flavia Bustreo, Assistant Director-General for Family, Women and Children’s Health, WHO. “We hope this report will focus high-level attention on the health needs of 10 to 19-year-olds and serve as a springboard for accelerated action on adolescent health.” 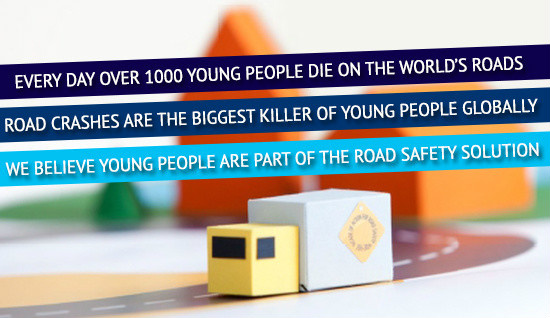 Road traffic injuries top cause of death
Road traffic injuries are the number 1 cause of adolescent deaths globally, and the number 2 cause of illness and disability. Boys are disproportionately affected, with more than three times the rate of deaths than that of girls. Increasing access to reliable and safe public transport can reduce road traffic injuries among adolescents. Road safety regulations (e.g. alcohol and speed limits), establishing safe pedestrian areas around schools, and graduated licensing schemes where drivers privileges are phased in over time, can all reduce risks.

Mental health problems take a big toll.
Globally, depression is the number 1 cause of illness and disability in this age group, and suicide ranks number 3 among causes of death. Some studies show that half of all people who develop mental disorders have their first symptoms by the age of 14. If adolescents with mental health problems get the care they need, this can prevent deaths and avoid suffering throughout life.

Pregnancy and childbirth-related deaths have fallen
Deaths due to complications of pregnancy and childbirth among adolescents have dropped significantly since 2000, particularly in regions where maternal mortality rates are highest. WHO’s South-East Asia, Eastern Mediterranean and African Regions have seen estimated declines of 57%, 50% and 37%, respectively. Despite these improvements, maternal mortality still ranks second among causes of death among 15 to 19-year-old girls globally, exceeded only by suicide.

Some other infectious diseases still major causes of death
Thanks to childhood vaccination, adolescent deaths and disability from measles have fallen markedly—by 90% in the African Region between 2000 and 2012. However, common infectious diseases that have been a focus for action in young children are still killing adolescents. For example, diarrhoea and lower respiratory tract infections now rank second and fourth among causes of death in 10 to 14-year-olds. Combined with meningitis, these conditions account for 18% of all deaths in this age group, little changed from 19% in 2000. 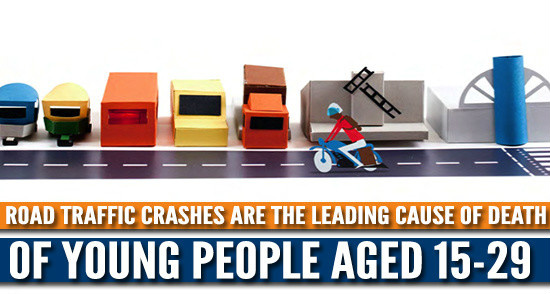 New data on adolescent health behaviours
New data from countries where surveys have been done show that fewer than 1 in every 4 adolescents does enough exercise (WHO recommends at least one hour of moderate to vigorous exercise per day), and in some countries as many as 1 in 3 is obese.

But some trends in adolescent health-related behaviours are improving. For example, rates of cigarette smoking are decreasing among younger adolescents in most high-income countries and in some middle- and low-income countries as well.
Critical period for preventing chronic disease

Adolescence is an important time for laying the foundations of good health in adulthood. Many health-related behaviours and conditions that underlie the major noncommunicable diseases start or are reinforced during this period of life.

“If left unchecked, health problems and behaviours that arise during adolescence—such as tobacco and alcohol use, diet and exercise patterns, overweight and obesity—have a serious impact on the health and development of adolescents today, and potentially devastating effects on their health as adults tomorrow,” says Jane Ferguson, Scientist in WHO’s Department of Maternal, Newborn, Child and Adolescent Health and lead author of the report. “At the same time, we must not let up on efforts to promote and safeguard the sexual and reproductive health of adolescents, including HIV.”

Health policies from 109 countries were reviewed for this report. Among them, 84% give some attention to adolescents. In three-quarters, the focus is on sexual and reproductive health (including HIV/AIDS); approximately one-third address tobacco and alcohol use among adolescents; and one-quarter address mental health. The report highlights the need for more countries to follow the example of countries like India whose new adolescent health strategy addresses a broader spectrum of health issues affecting adolescents, including mental health, nutrition, substance use, violence, and noncommunicable diseases, in addition to sexual and reproductive health.

The report also emphasizes the need for improved data and information about adolescents’ health and the programmes that address it. 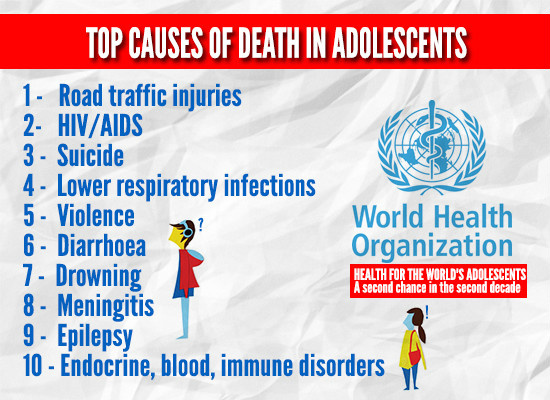 Get a snapshot of the report here.

YOURS specific mention within this report - see it here.
Roads must be safer. The hazards of the physical environment are at the root of much mortality and disability during the adolescent years. In high income countries, fatalities and injuries among adolescents are mostly related to road crashes and affect both drivers and passengers. In low and middle income countries, it is pedestrians and non-motorized road users who are most affected. The transport sector has a key role to play through road safety initiatives for non-motorized users, including adolescents, and ensuring that vehicle-related legislation and policies are implemented effectively
related to RTA.

The health sector can work with transport authorities on the adoption and enforcement of regulations, as well as supporting awareness campaigns and collecting, analysing and disseminating data on injuries and deaths on the road.13

Issues of road safety have attracted the attention of young people themselves. YOURS (Youth for Road Safety) is a global, youth-led nongovernmental organization that encourages young people worldwide to become advocates and fosters young people’s capacities to make their communities safe.

Health for the World's Adolescents - Summary