Where is the world's most dangerous country for young people?

Recently the Guardian wrote an article about the widening gap in youth mortality between the developed and developing world. A new analysis shows Violence, preventable diseases, and traffic accidents are to blame for a widening of the youth mortality gap between the developed and developing world, according to a new Guardian analysis of the most recent World Health Organisation (WHO) data.

Cyprus is the safest of the 184 countries analysed, with a death rate of almost one in every 4,762 youths, while Denmark, the fifth safest, halved its number of young deaths between 2000 and 2015. The United Kingdom (one in every 3,030 young people) is ranked just outside the top 10 safest countries, behind Israel. 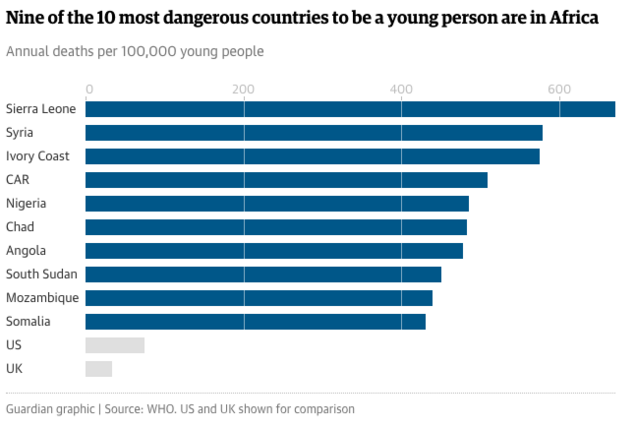 Liberal drug policies in the Netherlands may be responsible for a rate of drug-related deaths almost exactly ten times lower than in the US.

Globally, the mortality rate for young people decreased 21% between 2000 and 2015, with HIV-related deaths, in particular, falling significantly. Yet the gap between developing and developed countries has widened in that period, from 2.2 up to 2.4 times higher.

The explanation is that, while youth mortality rates are falling fastest in the world’s most and least developed countries, the decline is considerably slower in “mid-tier” countries such as Brazil and Venezuela, as defined by the Human Development Index.

Syria is the only non-African country to feature among the 25 countries with the highest youth mortality rates. Despite that, considerably more young people died as a result of violence in Brazil in 2015 than in Syria.

In Nigeria, the fourth worst-performing country, approximately 235,000 youths are estimated to have died in 2015. In absolute terms, this was the second highest number of young deaths in the world after India, whose population is seven times greater.

Road accidents are the most common cause of death of young people throughout the world. The WHO estimates that 350,000 young people died in 2015 as a result of traffic-related injuries. While the problem affects both developed and developing countries, the data reveals markedly different trends.

In Luxembourg, one of the safest countries in the world, 46% of youth mortality is caused by road accidents, but the related mortality rate is just under 10 per 100,000 – almost half the average global rate. In Venezuela, traffic injuries cause 29% of young deaths, but they kill 70 out of 100,000 young people every year – the highest rate in the world. Besides Venezuela, every other country in the top 20 for traffic-related deaths is in Africa.

Read the full article here: Where is the world's most dangerous country for young people?