Update from South East Asia - Epidemiology of crashes in India

Epidemiology is the science that studies the patterns, causes, and effects of health and disease conditions in defined populations. Our CORE Group Representative for South East Asia, Dr Naren Nallapeta shared a key study by the TATA Trust focusing on the causes of road crashes in his home country of India. It shows rapid motorization in one of the most populated coutries in the world.

Rapid motorization without a real focus on safety has left India with of the highest death rates due to road traffic crashes in the world.

Recent years have been witnessing an increasing amount of traffic on the roads leading to increased risks for road traffic accidents to occur. Evidence from developed and especially developing countries indicates that road traffic accidents are on the rise and are found to be fifth among important causes of deaths globally, leading to a significant proportion of injuries, deaths and disabilities in the population.

India has the highest proportion of deaths due to road traffic accidents in South East Asia. The situation is problematic in India because of lack of proper infrastructure facilities, poor road designs, poor implementation of traffic rules and regulations and a high load of a range of vehicles on the roads.

Fatalities and morbidities from RTAs mostly affect the economically productive age group. Studies indicate that young adults in their early thirties continue to be the victims of RTAs.m Pedestrians, users of non-motorised vehicles and users of motorised two-wheeled vehicles, who are often from poor or lower middle class households, are the victims of fatal RTAs.

Lack of systematic data generation mechanisms both at the national and state level leads to limitations in designing appropriate intervention strategies to deal with the problem in the country.In addition to this, research efforts to understand the social and economic consequences of deaths, injuries and long-term disabilities and their implications for the different sections of the population are limited.

A common site in India; lack of helmet use and incredibly unsafe mobility. 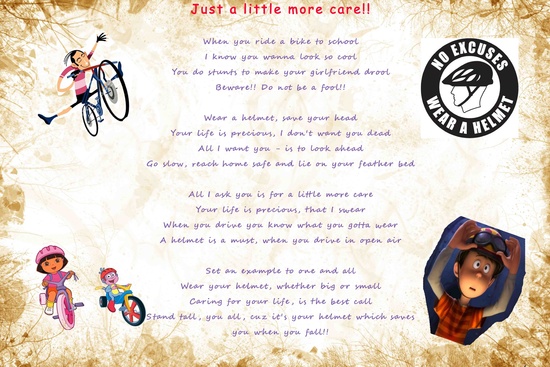 Click here to read Naren's poem on helmet use.