Uganda Red Cross Society (URCS) is set to sensitize boda-boda riders countrywide on road safety and First Aid treatment, the vice chairman of the central governing board of URCS, Dr. Dominic Lali has announced. Our resident columinst at YOURS - Brian Bilal Mwebaze works with the Uganda Red Cross who are currently spearheading road safety campaigns in the country and as a beacon of action for Africa.

“We are targeting boda-boda men to create awareness on road safety and train them on First Aid treatment when involved in accidents,”

Lali told officials of International Committee of Red Cross (ICRC) board members and staff of URCS and the state minister of refugees and disaster preparedness, Musa Ecweru. He made the remarks at the launch of 50 years of URCS’s humanitarian service in Uganda at the agency’s headquarters in Kampala.

He also called on government to expedite the review of the Red Cross Act 1964 to suit the global trends as the scope of the agency's activities have multiplied and no longer offering First Aid only as stipulated in the Act. 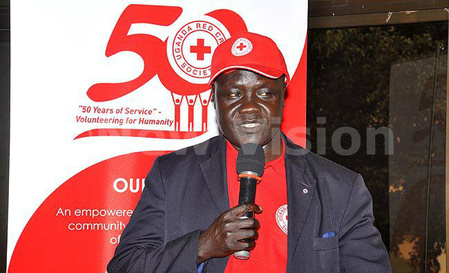 The celebrations are held under the theme: “50 years of service-Volunteering for humanity,” and will be climaxed on July 30, at Entebbe. Minister Ecweru backed Dr. Lali in creating road safety awareness, saying schools should also be targeted. The minister was angry that people use sophisticated gadgets such as earphones plugged in their ears when crossing main roads.

“There is a crisis and Red Cross should help us to sensitize people who plug gadgets in their ears when crossing the road. Sometime back people were very careful before crossing the road – they would first look left and then right but today this is not the case,” observed Ecweru.

Ken Odur, the interim secretary general of URCS, pointed out that the agency has been involved in recovery programmes for affected communities when calamities strike, proving safe clean water especially to refugee camps, distributing relief items to affected communities and capacity-building in early warning and action and others.

In many parts of the world, Boda Boda (border to border taxis) have become commonplace as a form of transport and a frequent means of employability for youth, especially in Eastern Africa.

The agency has 51 branches across the country serving a population of over one million.He said donors have resumed supporting the agency following administrative management issues that were sorted out, which led to a forensic audit whose report is to be released soon. Read the original article here.