Think Bikes! Making cyclists more visible on the road in the UK

According to a survery carried out by the Automobile Association Charitable Trust in the UK, new figures show that nine out of ten drivers (93%) admit it is sometimes hard to see cyclists while they are driving and more than half of the people spoken to were often 'surprised when a cyclist appears out of nowhere'.

These are the results of an AA-Populus poll of 17,629 drivers. A previous AA-Populus poll showed 85 per cent of drivers think motorcyclists are sometimes hard to see and more than half (57%) are often ‘surprised when a motorcycle appears from nowhere’.

As a result of these findings the AA and the AA Charitable Trust have got together, with support from British Cycling and The Motorcycle Industry Association, to launch a national 'Think Bikes!' awareness campaign

Initially one million free stickers will be distributed to drivers as a reminder to do a ‘double-take’ in their mirrors for cycles and motorcycles in their blind spots. It is proposed that the cycle sticker is placed on the passenger’s side and the motorcycle one on the driver’s side.

The campaign was launched on Friday 7 March at Marble Arch, London, with the help of famous Olympic cyclist Chris Boardman, 20 times TT winner John McGuinness and with support from the Metropolitan Police.

The original sticker concept came from Tony Rich, AA Patrol of the Year, after his friend, Jack Bellis, was killed in a motorcycle crash. Tony and Jack’s family wanted to do something to help prevent such crashes in the future. 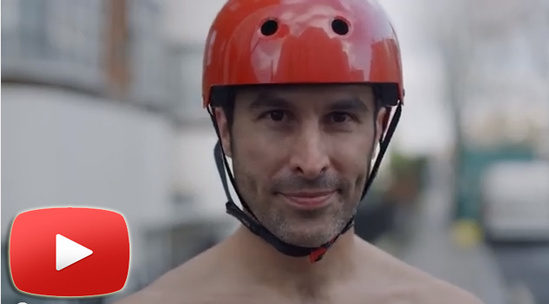 Now You See Me - Just what would it take for motorists to start noticing bikers and cyclists?

Naked cycling might not be the ideal solution -- it can get a bit brrr -- but our intrepid volunteer certainly turned a few heads on his commute through busy London streets. The stunt was part of the AA's #ThinkBikes campaign. Let's all stay safe on the roads!

Read more about the campaign here.

More about the Think Bike campaign