The science of distracted driving and why it's just so dangerous

A new article from Science Daily explains that talking while driving poses dangers that people seem unable to see. As a major contributor to road crashes worldwide, this epidemic is incredibly dangerous for a number of reasons. They are explored in science based study in the United States proposing ideas such as 'tunnel vision' and inattention blindness.

The original source for this story can be found at Science News.

“Keep your eyes on the road, your hands upon the wheel.”

The late rock and roll singer Jim Morrison was not a poster boy for public safety — and was no authority on safe driving. After all, later in “Roadhouse Blues,” he has beer for breakfast. But the opening line of that Doors’ song still resonates as sound guidance.

If only such good advice could stand the test of time. “Roadhouse Blues” hit the airwaves in 1970, long before the unlikely marriage of driving and talking on a cell phone. Millions of people now routinely conduct remote conversations while driving, despite research showing that it’s dangerous — even with two eyes on the road and both hands upon the wheel. 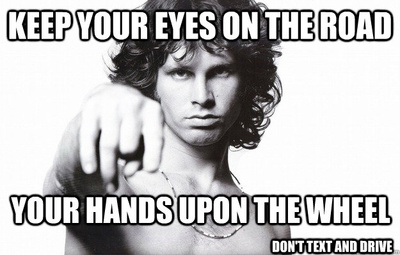 A meme of Jim Morrison from the lyrics of Road House Blues a song that was release years before distracted driving was considered a serious problem.

It turns out that hands don’t matter. It’s the conversation that can be lethal. Cell phone conversations impede what a driver sees and processes, a number of studies have shown. That, in turn, slows reactions and other faculties. This distracted state should be familiar to everyone. “That’s why you can drive home and not remember having driven home,” says Daniel Simons, a psychologist at the University of Illinois at Urbana-Champaign. “Just because you look at something doesn’t mean you see it.”

Braking badly
Undergraduate students in a driving simulator are slower to brake when given auditory tasks via a hands-free cell phone while driving (dual task) compared with just driving (single task).

Simons has shown that people assigned to observe certain activities in a lab setting can totally miss other events occurring in the very same space. The on-road versions of such blind spots show up when drivers engaged in a cell phone conversation fail to look at side streets or watch for pedestrians. This distraction may seem subtle and even fleeting, but it takes a toll: The risk of an accident quadruples when the driver is on the phone, studies have suggested.

Texting, talking and the use of tech while driving are serious incidents of distracted driving.

Research into driving behavior has produced a three-way disconnect between scientists who study it, legislators who regulate it and drivers who talk on the phone. Majorities of all groups acknowledge that texting while driving is risky (see sidebar). Fewer accept that chatting on a hand-held cell phone while behind the wheel is dangerous. And most drivers and state legislators don’t worry at all about hands-free calls.

As a result, the science of distracted driving has run well ahead of policy. Not a single U.S. state bans hands-free cell phone talking for most adult drivers. Some states limit hand-held cell phone use, but many others apply bans to only bus drivers or novices. Three states have no restrictions whatsoever on calling or even texting while driving.

Public views are also out of sync with the scientific findings, in part because it’s easy and usually harmless to drive while distracted. And many people assume that they can successfully perform multiple tasks simultaneously. But researchers are challenging that assumption. David Strayer, a cognitive neuroscientist at the University of Utah in Salt Lake City, has found that such supertaskers do exist, but comprise only 2.5 percent of people tested. As for the other 97.5 percent, he says, “I suspect they are kind of kidding themselves.”

TUNNEL VISION : Eye-tracking equipment reveals the broad coverage of drivers’ gazes without distraction (top). Doing an auditory task requiring a live conversation with an experimenter in the car (middle) or over a cell phone (bottom) limits the extent of drivers' attentiveness.

Data began showing up in the 1990s suggesting that cell phones and driving are a poor mix. In 1997, researchers at Sunnybrook Health Sciences Centre in Toronto combed through nearly 27,000 cell phone calls during a 14-month period made by hundreds of drivers who had been in crashes. The average risk of getting into a collision was four times as great when people were on the phone than when they weren’t. Phones with a hands-free option offered no advantage, the researchers reported in the New England Journal of Medicine.

The problem isn’t confined to North America. Scientists in Perth, Australia, checked on people who owned cell phones and who wound up in emergency rooms after car crashes. The researchers compared the likelihood of being on the cell phone before the crash with cell phone use during an uneventful drive at the same time of day one week earlier. The patients were four times as likely to have been on the phone during the smashup, the researchers reported in 2005 in BMJ.

Such observational studies don’t establish cause and effect. So scientists at Complutense University of Madrid actually got into cars with volunteer drivers and distracted them. The researchers had drivers make phone calls using hands-free phones that needed only the push of a button to work. Special vision-tracking devices showed that conversations requiring extra thought or concentration diminished drivers’ extent of visual scanning, speed control, detection of warning flashers and decision-making ability. That study, which appeared in Transportation Research Part F in 2002, still stands as one of the clearest examples of what it means not to give full attention to the road.