The normal texts that cost real lives - a focus in Australia

We know that texting while driving is a serious threat facing the safety of young people everywhere. Texting behind the wheel requires a high level of concentration that takes our mind off the road with potentially tragic consquences. This is the case in an Australian focus where very 'normal' everyday text messages have taken the attention of drivers off the road for those split seconds leading to tragic crashes. These texts are seemingly innocent but reading them behind the wheel has had disastrous consequences. This study serves as a chilling reminder of the danger of texting and driving.

Trivial text messages sent or read by drivers at the wheel have claimed the lives of at least 20 people on the nation's roads (in Australia) and left many more injured, a News Limited investigation shows.

A man believed to have crashed while texting a smiley face icon to a mate is among current cases being probed by state coroners and police. Other short messages linked to recent fatal accidents on the nation's roads include "I'll be home soon", and "Hey are you still coming today?".

The News Limited analysis of police, court and coroner's records reveals text wreck victims over the past decade include drivers, their passengers, other motorists, cyclists and pedestrians.Revelations of the mounting death toll have prompted a coalition of grieving relatives, road safety groups, mobile service providers and others to unite in a bid to stop such accidents.

They are urging News Limited readers to sign a pledge promising not to text behind the wheel, and also to take action to stop friends or family if they see them in the act.Grieving relatives who have shared their harrowing stories hope by highlighting the long-lasting ripple effects a single message can have, they might save other families from similar suffering. Many of the grieving said the trivial nature of the messages which preceded the fatal accidents made the death even harder to deal with.Police and road safety bodies admit the injury toll caused by texting drivers is vastly under-reported, with many less serious accidents simply remaining undocumented.

A NSW woman who was lucky to survive last year after she ran under a truck while typing "just finished for the day already whats crakin?" is one of the few known prosecutions nationally for non-fatal texting accidents. Some studies have shown texting increases the risk of a crash or near crash by up to 15 times for car drivers, and over 20 times for truck drivers. 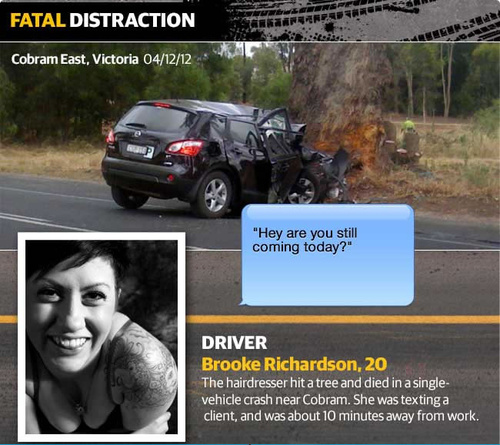 BROOKE RICHARDSON
Brooke Richardson was killed when her car careered off the road, her undamaged phone found at her feet. Vicki Richardson used to exchange texts with her hairdresser daughter Brooke at least 15 times a day.

Worried that something had happened that dreadful Tuesday morning last December, her first instinct was to send an SMS to her daughter, one that will never be read or answered: "Call ASAP, Brooke, please text me!! I love you." By the time it arrived, Brooke was already dead. Crash investigators found her phone, not damaged, between her feet in the wreck. A coroner last month found she'd been texting as she drove - arranging an appointment with a client at the new salon she had started working at in Cobram.

"She was only 10 minutes away from work, but she sent a message anyway," Vicki says. Mrs Richardson has started a foundation with the aim of spreading the "don't text and drive" message - a problem she fears will worsen. 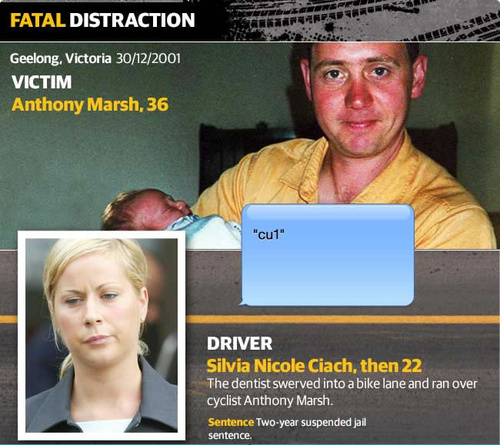 JASON STORTZ
Jason Stortz was killed by a texting driver while riding his bike at Yallah near Wollongong in 2009. Harry was only 16-months-old when his triathlete dad Jason, out riding his new bike, was killed by an under-age, unlicensed, texting driver at the wheel of his new Ford Falcon. His son has just turned five. There are daily reminders of his dad's absence. "I had to fill in forms at pre-school, was asked to put down dad's details. What do you do?" Kylie Stortz says.

"My son asks me 'mum, who will look after me if you go to heaven like dad?' Or he'll just ask things like 'did my dad like to eat this food?'. That's stuff he should just know because his dad should still be here."

No one knows exactly what happened in the accident, with the young driver a reluctant witness and his female passenger telling police she couldn't assist either - because she had been concentrating on her own phone at the time of the collision.

These real life stories serve as a chilling reminder of the consquences of texting while driving.