The Dutch 'Woonerf' - an example of safe road spaces

In Holland, where YOURS is a registered NGO, an example of safe road spaces shared by cyclists, motorists and pedestrians illustrates how safe road systems can save lives. In Holland, one of the most common forms of transport is cycling and the Woonerf space has reduced road collisions by 40% in neighbourhoods where they have been implemented.

At YOURS, we strive to provide our youth network with examples of good practise and systems that reduce the amount of road crashes and save lives. In Holland, the 'Woonerf', Dutch for 'residential road space', has dramatically reduced road deaths and collisions in areas that they have been implemented.

Now, the woonerf road safety idea could be exported to other parts of the world to create safer road spaces for road users. In Holland, the woonerf is place where pedestrians and cyclists have legal priority over motorists. The techniques of shared spaces, traffic calming, and low speed limits are intended to improve pedestrian, bicycle, and automobile safety. This style of road is also visible in In Germany, where similar zones are termed Verkehrsberuhigter Bereich (litt. "traffic calming area"). Under German traffic law motorists in a Verkehrsberuhigter Bereich are restricted to a maximum speed of 7 km/h, pedestrians, including children, may use the entire street and children are permitted to play in the street 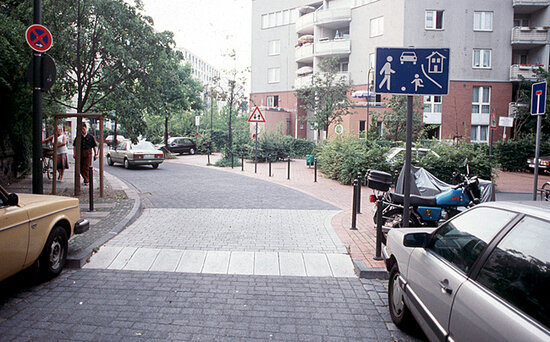 An example of a Dutch woonerf

A cleverly integrated blend of traffic-calming measures, the woonerf has been pioneered by the Dutch government to cut traffic speeds and reduce road crashes in residential areas across the country. Claimed to be "friendly" to drivers, cyclists, pedestrians and children alike, a woonerf is where cars, pedestrians and cyclists get more or less equal use of the roadspace. It has three key weapons in its armoury. Firstly, traffic speeds are forced down to "footpace", typically well below 12mph. Secondly, the principles are applied consistently nationwide so they are instantly recognised byroad users everywhere. Thirdly, legal liability is heavily weighted against the motorist in the event of an collision.

Road safety experts in Wales, United Kingdom have also support the woonerf, saying its best principles could be used to help cut road accidents in neighbourhoods across the nation. Peter Rodger, the Institute of Advanced Motorists’ chief examiner, has tested the idea by driving 20 minutes east of Amsterdam to Almere, a village entirely constructed around the woonerf.The positioning of housing, as well as the clever use of planting, play areas and chicanes, means there isn’t a straight road in sight. The roadway is created with an absence of kerbs and snakes left and right, making it difficult to know who has the right of way. 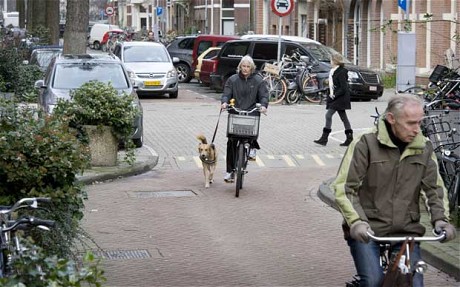 A recent article by the Western Times has found that the woonerf could be brought to Welsh roads soon to cut road crashes.

Rob Gifford, executive director of the Parliamentary Advisory Council for Transport Safety, says, "Woonerfs work because they deliver a consistent message to motorists. Motorists think 'I am a guest here', not 'I'm in charge'. But they are best designed into new developments and with the economic situation local authorities haven't got the money right now.

In other parts of the world, the woonerf is an example of advanced road systems and integration of people friendly spaces where traffic, cycling and other forms of pedestrian safety are implemented. This is an example of road safety advancements, which one day, similar ideas could be spread to other parts of the world where road traffic systems have developed and enable such advancements.

Telegraph Article on the Woonerf
Woonerfs in Wales?