The road safety community commemorates the World Day of Remembrance

Thousands of people die on the world's roads yearly due to road traffic crashes. To honour their lives and support those loved ones left behind, the World Health Organization (WHO) held a special online event to commemorate the World Day of Remembrance for Road Traffic Victims. We are proud to have been asked to lead the production of this important event.

On Friday, 18 November, Dr Etienne Krug, WHO Director for the Social Determinants of Health, hosted an online session that featured different dignitaries and leaders of the road safety community, including: 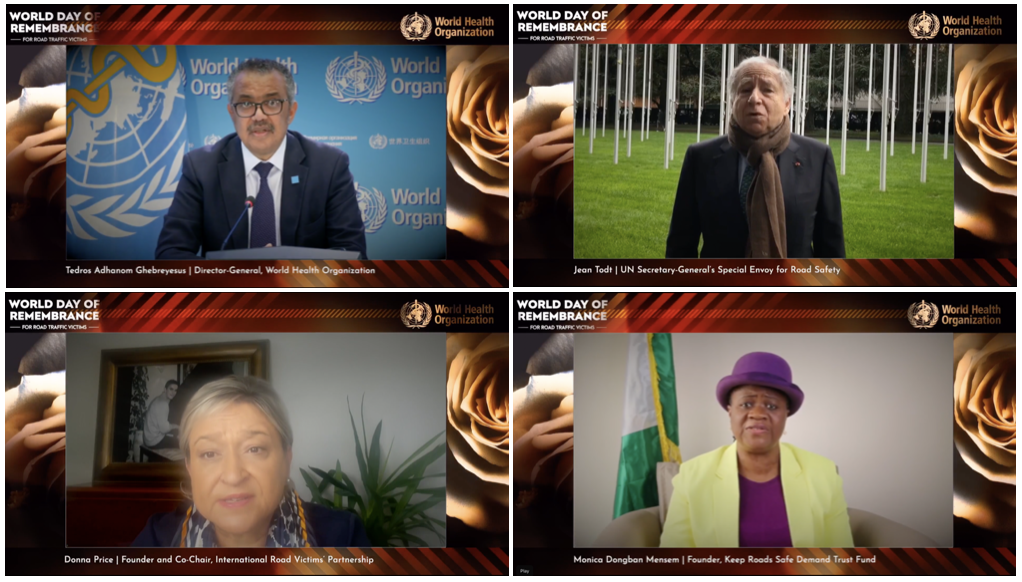 Donna and Monica shared their testimonials after losing their sons, Darren and Samson. For years, they have become committed advocates for road safety, supporting other victims and families left behind and demanding systemic changes to prevent and stop such as preventable road tragedies in their countries.

The programme also included two acted pieces developed by Soul City Arts. The first intervention pictured a young doctor speaking to his mother from the grave about his regrets for no longer being here. The second one brought to the screen the echo of a mother talking about her beloved son and her commitment to keep fighting until fundamental changes happen.

In the last segment, Valeria from the Global Alliance of NGOs for Road Safety confirmed the pledge of civil society organisations. She called to think and act differently to achieve the new Decade of Action's commitments. Deepanshu shared his vision of the future and reinforced that young people must be engaged at every stage of the decision-making process to design and deliver effective policies on road safety and sustainable mobility.

In his closing remarks, Dr Krug called for a commitment to adopt and adapt the strategies outlined in the Global Plan for the Decade of Action for Road Safety 2021-2030, to hold governments accountable, and to do what everybody can to achieve the goals. 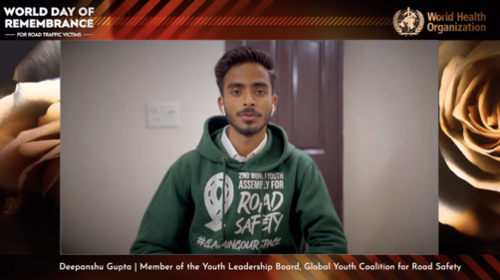 “I envision a World Day of Remembrance when we pay tribute to road traffic victims and celebrate a world where no one dies from a road crash, and no families are debilitated because of road crashes.”

About the World Day of Remembrance for Road Traffic Victims

The World Day of Remembrance for Road Traffic Victims was started by RoadPeace in 1993. In 2005, the United Nations endorsed it as a global day to be observed every third Sunday in November each year as the “appropriate acknowledgement for victims of road traffic injuries and their families”. Since then, the World Day of Remembrance has been observed and promoted worldwide by many governments, international agencies and groups such as the European Federation of Road Traffic Victims (FEVR), the International Road Victims’ Partnership (IRVP) and the Global Alliance of NGOs for Road Safety and their associated members. WHO and the United Nations Road Safety Collaboration encourage all road safety stakeholders to commemorate the World Day of Remembrance to pay homage to those who have died on the world’s roads, advocate for better support for victims and bereaved families and promote action to save lives.