It's the biggest film industry in the world enjoyed by the whole world, regardless of if you speak Hindi or not many people enjoy the exuberance of Bollywood. There is no doubt that Bollywood actors have a huge impact on their fans in the world's biggest democracy; India. Global superstar actor Aamir Khan joins India's Transport Ministry as road safety ambassador.

Amidst being associated with social causes and campaigning for them on his show 'Satyamev Jayate', Aamir Khan also likes to do his bit when it comes to serving society. Recently, the Road Transport Ministry decided to take Aamir Khan on board as the safety ambassador in order to reduce the frequently occurring accidents and to campaign against reckless driving. 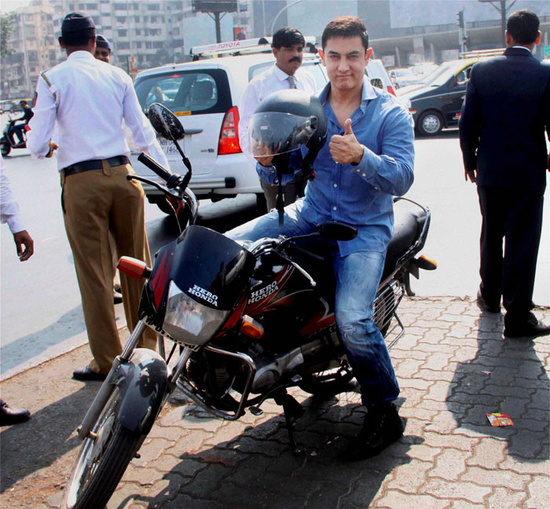 The actor, who was also the face of the 'Atithi Devo Bhava' campaign, apparently met the transport minister Nitin Gadkari for discussing about his role as the safety ambassador. Aamir Khan has always been very vocal about expressing his support for various causes and has been successful in tackling certain issues with his reality chat show.

However, now, with this new role, we may get to see this Khan extending some more support towards fans and public as he spreads awareness about the consequences of reckless driving. The abysmal state of rash driving in India kills hundreds of thousands of people a year. The actor has been brought in to help curb dangerous driving.

Friend of YOURS Mr Harman Sidhue (Arrive Safe) presents information on the Decade of Action for Road Safety to Aamir Khan.

How other countries can learn from this iniative
There is a clear lack of leaders when it comes to promoting a safety message in most parts of the world. Road safety is often seen as an unappealing topic yet, when championed by actors such as Aamir Khan who has epitomised the coolest roles on the screen, young people, young fans and the general population are more likely to pick up the message. Why? Because popular actors like Aamir Khan claim a sense of legitimate authority by capturing the hearts and minds of their viewing audiences, they are more likely to listen to Mr Khan as a peer than say, a police officer or politician. This of course must go alongside real measure to make road infrastructure safer as well as enforcing adequate laws countrywide.

As far as awareness goes, bringing top class actors such as Khan is step in the right direction.