The news about Zebraman was shared by Georgian media outlet netgazeti.ge. It stated that the ‘It’s Time to Obey the Road Rules’ campaign was initiated by Gori-based non-governmental organisation (NGO) It’s Time, and aimed to raise awareness of Georgian law, in which drivers were obligated to slow down or stop at a pedestrian (zebra) crossing if a person was walking on it.

However NGO members said this rarely happened in Gori and all throughout the country.

"This is a problem that bothers all of us; people of any age or social condition. So we wanted to do something that would attract attention and raise awareness,” It’s Time representative Kato Kotolashvili said. 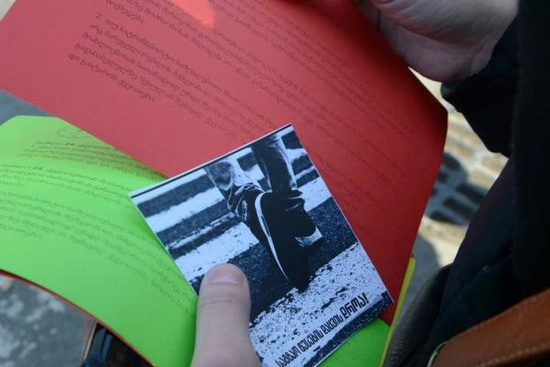 "We handed out excerpts from the law about driving to pedestrians and drivers and distributed stickers with our slogan ‘It’s time to obey road rules’,” she said.

Zebraman helped pedestrians safely cross the street all day today. The pedestrian crossing where the action took place was also painted in different colours to attract the attention of drivers and pedestrians.

"Georgia Alliance for Safe Roads" Executive Director of the Foreign Minister also held a peaceful demonstration of solidarity, which is dedicated to all the people who died in a car accident due to negligence of the driver. Zebra man also made an appearance here.

The number of people injured in a crash in the gap: 8,000 injured people in January-December 2014. According to him, the message of today's meeting: "together make way for infants and safe drivers''.

The Red Cross representative, Irakli Iakobidze said, 'The girl who died in a car accident action is needed on footpaths including zebra lines and drivers giving way to pedestrians. This is not a one-time action and future planning, "- says Mr. Iakobidze. Action "symbol" was a dressed up young zebra.