In India, the rich tapestry of cultural stories are told to children from a very young age. This include stories of Gods, villians, heroes and demons. Playing on cultural values, Transport and Police Departments in India have supported a street play that brings back the messengers of death on the road to warn people of their actions on the road in an indirect yet personal way.

Adapted from The Hindu Online

At times, a rude awakening etches experience of the moment in the mind. So felt the Transport and Police departments in India that organised street plays separately to sensitise masses to road safety rules through instilling a sense of fear for life.

Invoking mythology, the Transport Department had two students of Rajiv Gandhi Polytechnic College don the roles of Yama, the lord of death, and his key aide Chitragupta. They traversed through the city on an open cargo vehicle making loud and clear conversations that sought to send shivers down spines.

Dressed as the mythical characters, they agreed on the point that their visit to earth had been long overdue and that they must make the most of their stay to take back as many lives as possible before returning to their abode. And they decide to narrow down on those flouting road rules, by prompting the reckless drivers into getting into accidents, saying they do not deserve to live anymore, no matter what their age is. 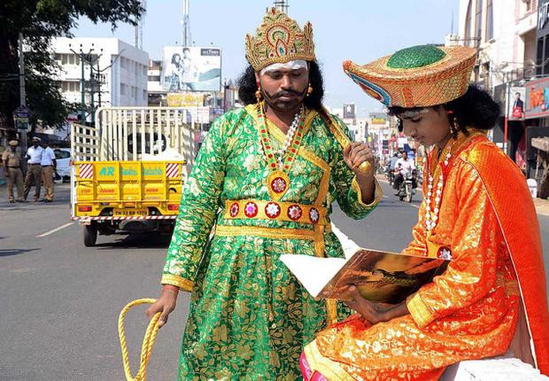 Through their conversations, they drew the attention of the public at the railway station, Paneerselvam Park, MGR Statue, Kalaimadu Junction and the Corporation Bus Stand.On their part, the Police Department organised another play, of enacting a mourning scene, by way of depicting the ‘body’ of an accident victim at the busy GH Junction.

While all would have gone through the advise-mode of sensitisation, it is the fear factor that makes one sit up and acknowledge the need to adhere to road rules, says M. Ramalingam, Regional Transport Officer, Erode.

Impact
Such street plays, he said, left behind a promising impact on motorists, infusing introspection and consciousness to desist from talking over mobile phone while holding the steering, drunken driving, and speeding.In Salem , cultural programmes formed part of the Road Safety Week which got under way in the district on Sunday.

The members of the TVS Revathy Kalaikuzhu rendered songs from MGR films to create awareness on the need to strictly adhere to road rules, avoiding drunken driving, and using helmets while riding two-wheelers.

The cultural programmes are organised on the theme ‘Safety is not just a slogan; it is a way of life’. 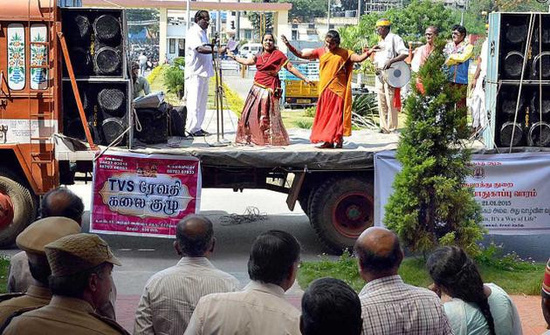 Cultural programmes organised by Transport Department in connection with Road Safety Week at the Collectorate in Salem on Monday.PHOTO: P. GOUTHAM

Later, the troupe performed at Collectorate round about, five roads junction and new bus stand.The Indian Red Cross Society launched a mobile campaign van to create awareness on safe travel.Mr. Maharabushanam, who is also the president of district Red Cross, flagged off the rally, in the presence of J. Munna, chairman, L. Anil, vice-president, J. Jakir Hussain, its secretary, Prabakaran, Junior Red Cross convener. The members of the Red Cross and the Junior Red Cross visited various parts of the city and made announcements on the road rules and the need to follow them strictly.

Embedding road safety with a cultural focus can be a powerful way to personalize messages to a local context that citizens can relate to.

Read the Original Article at The Hindu