See the person behind the helmet - a UK campaign from THINK!

Person centered road safety campaigns have evoked some meaningful messages. These types of campaigns focus on the people in the road safety messages because after all, it is people's lives that we are trying save. A new campaign launched in the UK focuses on 'seeing the person behind the helmet' and calls for drivers to take extra care for motorcyclists who are particularly vulnerable on the road.

The campaign includes an advert that promotes the message that drivers should see the people behind the helmet.

Drivers are being urged to “see the person behind the helmet” and take longer to look for motorcyclists in the latest THINK! motorcycle safety campaign, launched today (11 March) in the United Kingdom by Stephen Hammond, road safety minister for Great Britain.

The £1.3m campaign, timed to coincide with the time of year when motorcycling increases, the summer and it encourages drivers to take longer to look for bikers and to think about the biker; not just the bike as is the focus of seeing Dave the new dad (pictured above). The campaign will run from March to May with messages delivered through radio advertising and in petrol stations. Wider awareness will be generated through TV video on demand advertising, targeting younger drivers in particular. 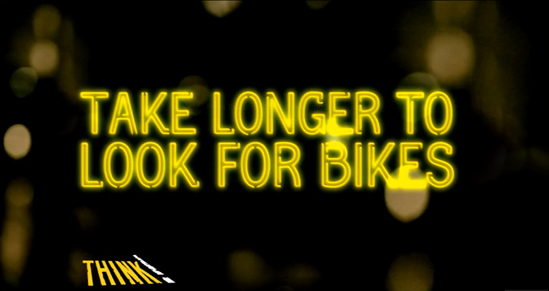 More can be found at Road Safety GB's website and the THINK! Site

Stephen Hammond said: “Motorcyclists account for just 1% of traffic but 19% of deaths on Britain’s roads, and 30 bikers are killed or injured in accidents at junctions every day. I am determined to reduce this terrible toll.

“That is why we are funding this THINK! campaign to remind drivers to look out for motorcyclists – particularly at junctions – and to see the person behind the helmet, not just a motorbike.”

The campaign was informed by statistics which show that motorists failing to look properly is a factor in half of all accidents where motorcyclists are killed or seriously injured at a junction; and wider research showing that drivers are more likely to notice motorcyclists on the roads if they know a biker themselves.

Neil Greig, from the Institue of Advanced Motorists in the UK director of policy and research, said: “There are far too many SMIDSY (sorry mate, I didn’t see you) accidents on our roads today, so we welcome the new THINK! awareness campaign for motorcyclist. “‘Failed to look’ is the top reason for serious crashes and research shows that drivers often miss smaller vehicles when they scan the road before a turn. A few extra moments spent checking for motorcyclists means everyone gets home safely.”

Download this poster to use free as part of the Sureal Poster Series released by YOURS in 2011.

Globally, motorcyclists and other two wheel users are recognised as particularly vulnerable drivers. The injury rate in low and middle income countries are signficantly higher than high income countries. In developing nations, two wheel transport is much more prevalent and the lack of helmet use and the subsequent head injuries are a massive cause for deaths of rider in motorcycle crashes.