This Second Conference is inspired by and follows the First Global Ministerial Conference on Road Safety, held in Russia in 2009, which gathered more than 70 ministers and 1,500 participants from around the world. The main outcome was a Declaration urging the United Nations to call for the Decade of Action for Road Safety 2011-2020. Launched officially in May 2011, the Decade of Action aims at saving 5 million lives during this ten-year period. The Second Conference is a reaction to a serious public health problem that affects countries socially and economically, in particular low- and middle-income countries.

During the 67th United Nations General Assembly in September 2012, Brazil’s President Dilma Rousseff, welcomed the launch of the Decade of Action for Road Safety 2011-2020 and reaffirmed that "Brazil has mobilized actions to protect life, which will ensure the reduction of road traffic injuries, a leading cause of death among the world’s young population." 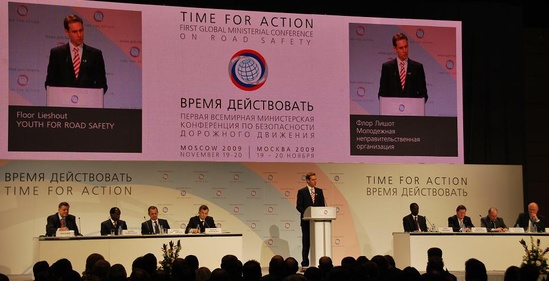 The Second Conference is timely, in that it takes place during the final negotiations of the goals which will be set as part of the post-2015 development agenda. It will also be an opportunity for Member States to exchange information and experiences on best practices in road safety. Delegates will review progress in implementation of the Global Plan for the Decade of Action for Road Safety 2011-2020 and identify concretely how to achieve its stated goal. It is a unique moment to bring a new impetus to the Decade of Action at its mid-point – a time to reaffirm commitments and propose new strategies for the next five years, in light of the scenario that should emerge from discussions on the new Sustainable Development Goals.

The National Organizing Committee and the International Advisory Committee welcome the delegates of the Second Global High-Level Conference on Road Safety, and hope to meet you in Brasilia, Brazil. The conference takes place on the 18-19 November 2015. A youth element is planned for this event.