Seatbelts - Saving thousands of lives around the world everyday...

The Center for Disease Control and Prevention (CDC) report that since 1975 to 2008, figures have shown that the use of seatbelts in the United States alone has saved an estimated 255,000 lives! Although primary seatbelt law does not exist in every state in the US, it is clear, from the evidence presented by CDC that seatbelt laws and the use of seatbelts in vehicles save lives.

The Surreal Poster Series places one of its focuses on the importance of seatbelts.

A seat belt, sometimes called a safety belt, is a safety harness designed to secure the occupant of a vehicle against harmful movement that may result from a collision or a sudden stop. A seat belt reduces the likelihood and severity of injury in a traffic collision by stopping the vehicle occupant from hitting hard against interior elements of the vehicle or other passengers (the so-called second impact), by keeping occupants positioned correctly for maximum benefit from the airbag, if the vehicle is so equipped, and by preventing occupants being ejected from the vehicle. The seat belt is designed to stretch at a controlled rate to absorb crash energy and reduce the severity of the occupant's deceleration.

Seat belts protect people from needless death and injury. But whether it is because they are in a hurry, distracted, or they simply forget, many people don’t wear their seat belts, and thousands die as a result. CDC recommends effective, well-enforced seat belt laws to ensure that every person in every seat buckles up on every trip.

According to the National Highway Traffic Safety Administration (NHTSA), more than 15,000 lives are saved each year in the United States because drivers and their passengers were wearing seat belts when they were in a road traffic crash. 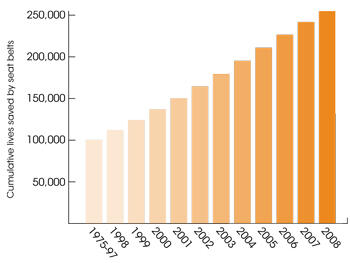 The use of seat-belts and child restraints is one of the most important actions that can be taken to prevent injury in a motor vehicle crash. While seat-belts and child restraints do not prevent crashes from taking place, they play a major role in reducing the severity of injury to vehicle occupants involved in a collision. An occupant’s chance of survival increases dramatically when appropriately restrained. 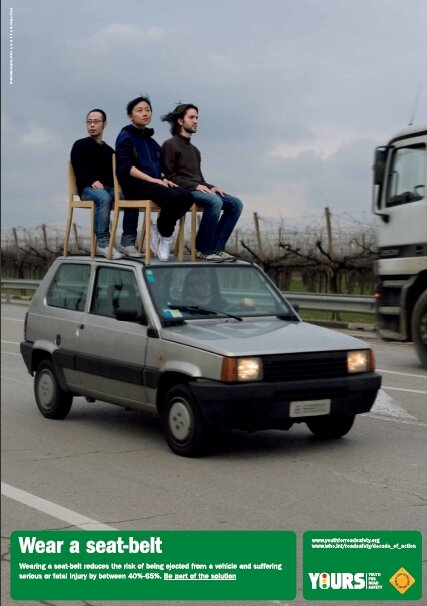 Check out the Surreal Poster Series