Its a well documented topic of debate in the road safety community, do blood and guts adverts in road safety public service announcements have an impact on a road user's behaviour? According to new research, scary adverts are more memorable but less likely to change behaviour.

Chattering schoolchildren don colourful anoraks; clutching hands, they depart for a woodland picnic. Elsewhere a young man leaps into his car and speeds off to work. Moments later he careers off the road and his spinning car kills each one of the cheery youngsters. The camera lingers on their dead hands and the now-empty classroom. A grim voice explains that they represent the children killed as a result of speeding in Northern Ireland since 2000.

British road-safety adverts are more shocking than those broadcast in America, says Anne McCartt of the Insurance Institute for Highway Safety, an independent research group there.

The British penchant for horror might reflect the nation’s long tradition of public-service broadcasting, which seeks to entertain and inform at once. But do the ads work?

Though gory, shocking public-information films linger in people’s heads, they seem not to alter behaviour much. If the consequences seem too extreme, the threat may seem too far-fetched, says Josh Bullmore, who has both made and studied such adverts. Few may believe that disaster could befall them or adjust their behaviour accordingly. Tessa Langley of the University of Nottingham has compared the impact of smoking campaigns that showed tumours erupting disgustingly out of cigarettes with more positive ones that also urged people to quit. The former proved more memorable, but the latter led more people to ring the national smoking helpline. 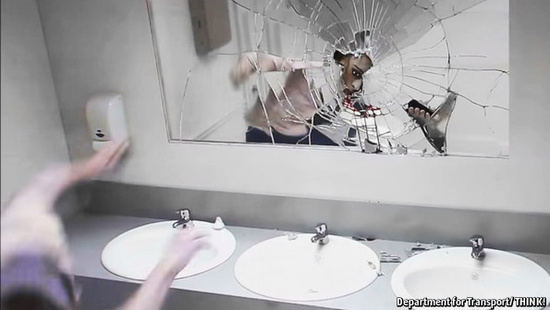 The budget for public-information films is shrinking. The Central Office of Information, the government’s marketing department, was closed in 2011. In 2008-09 the Department for Transport (DfT) spent almost £3m on its drink-drive advertising campaign. In 2013-14 spending fell to less than £1m. Unable to afford as many spots on television, the scaremongers hope their films will be shared on social media. And that is encouraging them to churn out the gory kind. In a recent advert from the DfT, men washing their hands in a pub toilet are startled by the face of a mannequin smashing bloodily through the mirror. The ad suggests a hashtag, #publooshocker, for online sharing. Less shocking adverts might work better, but fewer people would see them.

What do you think? Has a scary road safety advert encouraged you to change your behaviour on the road?

Read the Original Article at the Economist