A specific stand-alone target in the Health Goal to reduce road traffic fatalities by 50% by 2020 and a target on sustainable urban transport in the Cities Goal have been approved, in a landmark achievement for the global road safety community. For our friends at the FIA Foundation, it marks a successful culmination to more than three years of advocacy and coordination of a campaign, in partnership with a wide coalition including YOURS, to secure inclusion of road safety in the global development agenda for the first time. FIA Foundation staffers participated in the final two-week session of intergovernmental negotiations, as they have done in every relevant session for the past 18 months, talking to government missions and UN agencies to ensure that the targets retained support. YOURS also helped with this push.

The SDGs will guide all global development efforts over the next 15 years, designed to ‘stimulate action in areas of critical importance for humanity and the planet’.

The final wording of the targets, which will be formally adopted by world leaders at a special summit in New York in September, is:

Goal 3: Ensure healthy lives and promote well-being for all at all ages:

3.6. By 2020, halve the number of global deaths and injuries from road traffic accidents

(In the Health Goal, the stand-alone road safety target is lined up alongside other major priorities including maternal and under-5 mortality, AIDS and universal health coverage. The 2020 SDG target is far more ambitious than the 2020 goal set for the UN Decade of Action for Road Safety to ‘stabilize and reduce’ road deaths.)

11.2. By 2030, provide access to safe, affordable, accessible and sustainable transport systems for all, improving road safety, notably by expanding public transport, with special attention to the needs of those in vulnerable situations, women, children, persons with disabilities and older persons 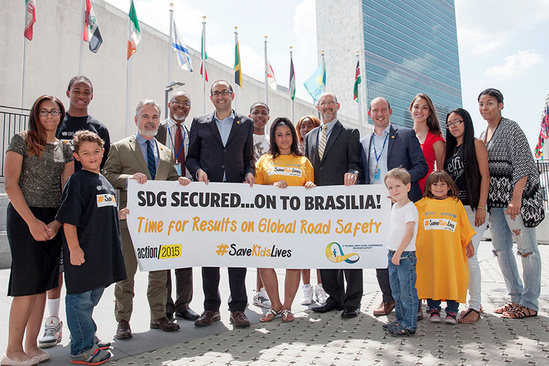 A delegation of #SaveKidsLives campaigners from New York schools presented Ambassador de Aguiar Patriota with the Child Declaration on Road Safety, a call to action for safer roads for all the world’s children. A ministerial-level conference will be hosted by the Brazilian Government in November 2015 to discuss the implementation of the road safety SDG targets.

The FIA Foundation’s director, Saul Billingsley, said: “This is an historic advance for road safety. For the first time this issue is recognised and included as part of the mainstream global priorities for the next fifteen years. For the first time UN member states have committed, in lengthy intergovernmental negotiations, to a specific, time-based, numerical global target for road fatality reduction. By setting a 2020 health target, and demanding early results, the international community is recognising the urgency of the road traffic fatality epidemic and making this a priority issue within the SDGs. Governments, donors and the road safety community must rise to this challenge - which goes far beyond the goal set for the UN Decade of Action - and accelerate and amplify efforts to reduce this avoidable carnage on the roads.”

Director of YOURS, Floor Lieshout, said: ""We must ensure that there is mainstream youth involvement in implementing these goals over the next 15 years. Young people are hugely affected in terms of road traffic injuries and together with robust laws, enforcement, infrastructure improvements and education, youth can make a massive impact amongst their peers for positive road safety action. This was the motivation in recruiting Mr Aakash Shah as our Ambassador for the Post-2015 Agenda".

YOURS has been working in alignment with the international community in pushing for Safe and Sustainable Transport to be recognized and acknowledged on major international platforms pertaining to youth priorities for the Post-2015 Development Agenda. Read some of our highlights for our involvement in the consultation rounds in the Post-2015 Development Agenda.

As consultations on the post-2015 development agenda moved forward, YOURS amplifed young people’s voices and advocated for road safety. YOURS was heavily involved in the GPY2015 (Global Partnership on Youth) a consultation run by the Secretary General's Special Envoy on Youth. This culminated in a Crowdsourcin platform where youth addressed ideas and solutions to pressing youth issues and voted on the most pertinent. Safe and Sustainable Transport, proposed by YOURS was voted as the #1 issue in Health and overall. Read more.

In our consistent push to bring road safety to the international agenda, our Global Youth Network for Road Safety strongly believes that road safety should be on the agenda, so we wrote written a letter to the United Nations Secretary General Ban Ki Moon's special Envoy on Youth Mr Ahmad Alhendawi. We publish it here for you to see. Read more.

Our CORE Group Representative for South America, Mr Daniel Cano attended the  prestigious World Urban Forum 7 (WUF) in Medellin, Colombia representing YOURS with the mission of bringing the global road safety cause to the table in discussions for the Post-2015 Development Agenda. He has written a report for YOURS and we share it with you here.

YOURS was involved in a landmark conference for the Post-2015 Development Agenda; the World Conference on Youth which took place in Sri Lanka.  The biggest youth conference in the world brought together young people from over 170 countries. The event carried the tagline of ‘Mainstreaming Youth in the Post-2015 Development Agenda’ and served as one of the principal methods of hearing young people’s voices in the next development agenda moving beyond Millennium Development Goals. Read more about it here.

The objective of the GPY2015 partnership is to ensure that young people are actively participating in the setting, implementing, and evaluating the new development agenda due to replace the MDGs in 2015. This partnership offers a unique platform for all stakeholders working on youth development to express their views, and help identify specific targets and indicators for youth empowerment, which could feature in the Post-2015 Development Agenda. Read more.

In New York, the third annual ECOSOC Youth Forum concluded with a Global Youth Call being presented to the Member States. Endorsed by more than 1,000 youth and civil society organizations from some 140 countries, the Global Youth Call is an emerging global consensus on concrete proposals for target areas on youth in the Post-2015 Development Agenda. Forty speakers from the floor provided their comments and reflections on the consolidated document. Read more.

We share that a specific road safety goal has been mentioned in the zero draft in the "Introduction and proposed goals and targets on sustainable development for the Post-2015 Development Agenda". Read more.

YOURS CORE Group Representative for South East Asia Dr Naren Nallapeta is a trained surgeon and a member of the International Federation of Medical Students' Association (IMFSA), the biggest association of medication professionals around the world. He is also passionate about road safety and on the basis of this, attended the 63rd IMFSA General Assembly in Taiwan, Province of China, with the mission of sharing road safety for the Post-2015 Agenda. Read more.

The #SaveKidsCampaign has been lead by YOURS in collaboration with United Nation Road Safety Collaboration. The campaign is the official signature movement for the Third UN Global Road Safety Week which holds the theme of 'children and road safety'. This constitutes children from age 0-18. The campaign creates a tangible movement for road safety all around the world and places an increased focus on the cause to influence the Post-2015 Sustainable Development Agenda. Read more.

In our mission to promote youth and road safety issues across the world, a new member of the team comes aboard at YOURS with a specific and robust mission to embed youth into the forthcoming Post-2015 Development Agenda. Aakash Shah is a young, passionate and talented young man who has previously worked closely on the MY World survey in India and continues to make strides for youth involvement in road safety. He joins YOURS' global team in a Global Ambassador position to bring awareness to the road safety crisis facing youth on an international platform. Read more about his role here.

Within this process, YOURS' Ambassador on the Post 2015 Development Agenda, Mr Aakash Shah has been leading an advocacy push to reach out to permanent missions at the United Nations calling for specific support on targets in the Sustainable Development Agenda and involvment in the High Level Conference on Road Safety in Brasilia. Read the letter sent to permanent missions across the UN here.