Our Regional Coordinator for Europe, Ms Ana Rita Lavado has shared information about her region, Europe. A press release issued by EUROPA indicates that Europe has seen its second 'good' year for road safety putting Europe firmly on track to hit its road safety targets.

2013 is the second year in a row that saw an impressive decrease in the number of people killed on Europe's roads. According to preliminary figures, the number of road fatalities has decreased by 8% compared to 2012, following the 9% decrease between 2011 and 2012. This means that the EU is now in a good position for reaching the strategic target of halving road deaths between 2010 and 2020. Road safety is one of the big success stories of Europe. The 17% decrease since 2010 means that some 9000 lives have been saved.

"Transport safety is a trademark of Europe. This is why it is extremely important that the good results from 2012 were not a one-off. I'm proud to see that the EU is fully back on track to reach the road safety target for 2020. However, there are still 70 people who die on Europe's roads every day, so we cannot be complacent. We must continue our joint efforts at all levels to further improve the safety on European roads." 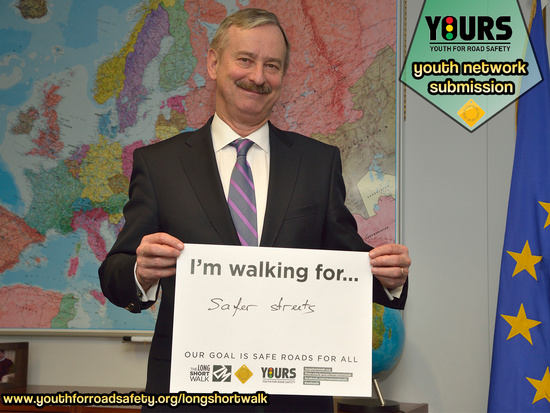 Siim Kallas partaking in the YOURS edition of the Long Short Walk campaign.

Country by country statistics (see table here) show that the number of road deaths still varies greatly across the EU. On average, there were 52 road deaths per million inhabitants in the EU. The countries with the lowest number of road fatalities remain the UK, Sweden, the Netherlands and Denmark, reporting around 30 deaths per million inhabitants. Notably Spain, Germany and Slovakia have improved their positions on the list, moving in among the traditional top performers.

Only a few years ago, in 2011, progress in cutting road deaths fell to a disappointing 2%. However, a reduction of 9% in 2012 and of 8% in 2013 mean that Member States are back on track towards the strategic target.

Those Member States that have made progress but whose road fatality figures are still much higher than the EU average (Poland, Bulgaria, Croatia, Latvia, Lithuania and Greece) are encouraged to strengthen their efforts. The situation in Latvia, where the road safety situation unfortunately did not improve at all during the past year, merits particular attention; the number of road fatalities also increased in Malta and Luxembourg although the total numbers in these countries are so small that the big fluctuations from one year to the other are not statistically significant.

Another worrying feature of the statistics is the situation of vulnerable road users: The number of pedestrians killed is decreasing to a lesser extent than expected and the number of cyclists killed has recently even been increasing. This is partly due to the fact that more and more people cycle; the challenge for Member States is to encourage people to use their bicycles rather than their cars more often, but to make sure that the shift from car to bicycle is a safe one.

Read about the European Youth Declaration for Road Safety.

For example, key recent initiatives include the new European driving licence (IP 13/25) and the entry into force of the cross-border enforcement directive, for the pursuit of traffic offences across borders (1). A proposal for improved technical checks of cars has been adopted by the European Parliament (MEMO 14/637), and a major step has been taken towards a strategy to reduce the number of people seriously injured in road traffic (IP 13/236).

This update was provided by Ana Rita Lavado - Regional Coordinator for Europe.