The World Transport Bank published a paper called Road Crash Trauma, Climate Change, Pollution and the Total Costs of Speed to raise awareness on the impact of speed on the safety of road users on congestion, pollution, and total costs of road travel to raise its case for speed reduction. Global Road Safety Partnership called this “an enormous opportunity to reduce road trauma”.

Speed and the risk of fatal crashes

Speeding is directly related to the likelihood of a crash occurring and the severity of the consequences of the crash. The World Health Organization (WHO) reports that every 1km/h increase in speed raises the risk of an injury by 3% while also raising the risk of a fatal crash by 4-5%.

Speeding increases the likelihood that a driver will lose control of the vehicle because of a reduced reaction time to anticipate and respond to oncoming hazards. A high speeding vehicle also has “increased instability” and is more dangerous in an approaching curve.

In 2018, the National Highway Traffic Safety Administration reported that speeding was a factor in 26% of all traffic fatalities which means 25 deaths per day. For more than two decades, speeding has been involved in approximately one-third of all motor vehicle fatalities. 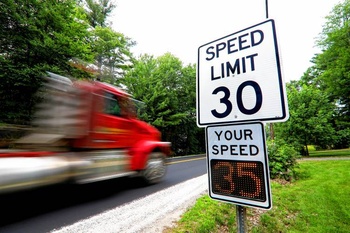 Speed management
With the new Decade of Action for Road Safety, governments and organizations have begun to address road safety risks.

Earlier this year, the Brussels Capital-Region set a default speed limit of 30hp from the original 50kph. The new speed will not only apply to the capital but also to all minor roads in the region. According to Brussels Mobility, about 60% of roads in the Brussels region are already in a 30kph zone.

To continue raising awareness on speed, the United Nations Road Safety Collaboration (UNRSC) declared that the 6th UN Road Safety Week to be held this May will focus on speed.