Promoting walking in Africa - what's at stake? - Article by CityLab

Africa is the world's most rapidly urbanizing continent. Transit in cities will have to adapt to encourage walkability and prevent isolating sprawl. There has been a focus on 'sharing the road' for some time. This article by CityLabs written by Sam Sturgis explains the African situation.

John Howe, a widely published academic in the field of African infrastructure and transportation, posed a series of questions back in 2001.  Each sprung from a larger, underlying curiosity: Why haven't African cities been investing in pedestrian infrastructure?

Why is this? Is it the very ubiquity of walking, or simply that it lacks any sense of sophistication, or modernity, that many seem to yearn for? Is it perhaps because it has been, until comparatively recently, largely an unqualified phenomenon? Or is it simply because it is regarded as unimportant?

The reasons undergirding urban Africa's relative dearth of pedestrian infrastructure are the subject of incomplete debates on the influence of history and colonialism, among many other factors. But what is undeniable is that people in Africa's cities commute heavily on foot. In Kinshasa, capital of the Democratic Republic of the Congo and home to 10 million residents, an estimated 60 to 80 percent of travelers walk, according to a 2012 report. In Dar es Salaam, the largest city in Tanzania, about 70 percent of all travel is done either on foot or bicycle. "The share of walking trips in sub-Saharan Africa is higher than in any other region of the world," a 2013 U.N. report states. 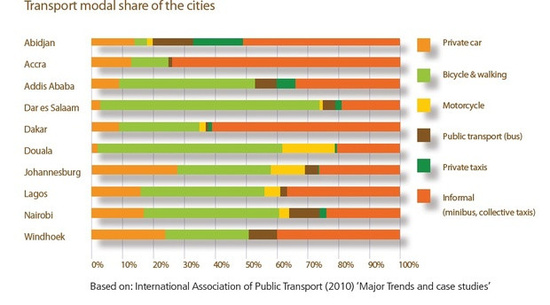 This shouldn't come as a surprise. Cities in sub-Saharan Africa, once shackled by colonial exploitation, remain relatively poor (though they are catching up). Poverty, as the 2000 book Compact Cities: Achieving Sustainable Urban Forms explains, is closely correlated to rates of pedestrian transit.

But now more than ever is a good time to revisit the relationship between Africa's urban hubs and walking. In the 14 years since Howe explored the topic, both the perception of walking as transit and the state of urbanization in Africa have changed greatly.

Africa is expected to become the most rapidly urbanizing region of the world five years from now. Between 2020 and 2050, Africa's urban population will triple, the U.N. projects, with many entirely new cities developing along the way. (CityLab has covered urban walkability and its potential benefits extensively, including here, here, and here.) For better or for worse, urban Africa's sheer volume of pedestrian transit makes it the global epicenter of walking at a time when "walkable" cities have never been more in vogue.

Tackling a topic of such dimension is a daunting task. The African continent is too big and diverse to be summarily defined. Nonetheless, urban planning efforts  underway in Addis Ababa, Ethiopia, and Nairobi, Kenya, demonstrate that some cities south of the Sahara are positioning themselves to be more walkable urban hubs.

David Rifkind, an academic that has studied Addis Ababa extensively, believes that walkability has always been an important part of the Ethiopian capital's short history. Unlike other urban hubs in Africa, where the quality of sidewalks has eroded noticeably (if they are present at all) in recent decades, sidewalks are ubiquitous in Addis Ababa, and investing in pedestrian infrastructure has been a consistent priority. Nevertheless, the city's accessibility on foot has gradually given way to sprawl.

The city's horizontal expansion has been well documented, becoming so extreme that residents on the periphery, suddenly facing consumption by the capital city, have reacted in protest. In a 2012 report, American urban planner Wendell Cox warned of such perverted growth, arguing that Africa's cities had, "become too spatially large for walking to suffice."  By the end of this month, Addis Ababa is expected to complete an ambitious $475 million light rail project. This will be sub-Saharan Africa's first rapid-transit network, David Rifkind says. And the new rail system should encourage much-needed residential density, mitigating sprawl as well as catalyzing greater volumes of foot traffic outside the urban core.

"What [the light rail] is going to do is open up all kinds of affordable housing for the emerging middle class," explains Rifkind, who also teaches at Florida International University in Miami. Dense, middle-class communities are the lifeblood of more accessible, pedestrian-oriented commerce, he says. Just like young professionals in cities like Washington, D.C., Addis Ababa's young workers are gravitating to neighborhoods around the new rail stations—even before they open. There, they expect to find retail shops and restaurants easily accessible on foot. 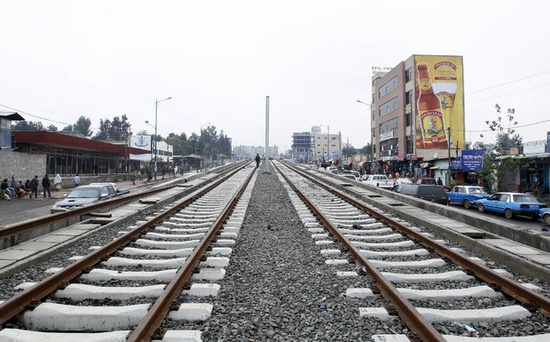 A man walks along the electrified light-rail transit construction in Ethiopia's capital, Addis Ababa. The project presents an opportunity for the city to develop dense, walkable neighborhoods. (Reuters/Tiksa Negeri)

"The new light rail stations going out into the periphery of the city already have neighborhoods growing up around them," Rifkind says. "It’s going to create even denser development. So you’ll have a whole neighborhood with all sorts of shops and restaurants."

The state of walkable transit is far less rosy 700 miles south of Addis Ababa, in the Kenyan capital of Nairobi. "The road is really contested. And there’s a lot of attempts to claim ownership, or claim rights to be on it." explains Amiel Bize, a Columbia Ph.D candidate who has been studying pedestrian safety in Kenya since 2010. "[T]he default in Nairobi for the proper road user is the car."

50 to 70 percent of all traffic accidents in Nairobi involve a pedestrian, according to Bize, who calls that a ballpark estimate and notes that the aggregate number of pedestrian fatalities is likely underreported. Nairobi represents a sliver of the dangerous environment pedestrians face across the continent. According to the WHO's 2013 Road Safety Report, 38 percent of road traffic deaths in Africa involve pedestrians, which is 16 percentage points higher than the world average. 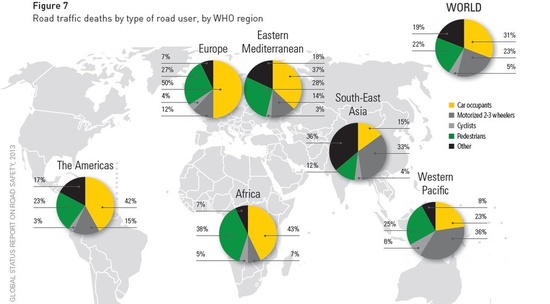 The ongoing battle for the roads of Nairobi is an extension of the city's broader class segregation: Cars, a transit option for the city's upper classes, command the road with superiority. Pedestrians, many of whom belong to Nairobi's lower class of informal laborers, are funneled into dangerous and uncomfortable walking environments. (One study found that residents of Nairobi's slums were twice as likely to walk to work rather than travel by automobile). But the government of Nairobi is signaling that it's ready to break this socio-spatial status quo.

In February, the City County of Nairobi is expected to present a non-motorized transit policy, a first of its kind in Kenya. No formal proposal has been presented yet, but it will likely incorporate facets of the U.N. and FIA Foundation-sponsored Share the Road campaign, a detailed guideline for non-motorized transit put forward in 2013. (The proposal was developed with input from Kenyan authorities). And Nairobians eager for a more walkable, pedestrian-friendly city are anxiously awaiting the new intiative.

"Walking and cycling have been completely neglected in Kenya's capital," an African urban planning blog argued in December. "Kudos to the City County of Nairobi for starting a process of developing the first NMT policy in the country."

Whether Addis Ababa's rail network and Nairobi's non-motorized transit plan will truly render sub-Saharan cities more walkable will be tested by time. Their efficacy will hinge greatly on whether pedestrian fatalities drop and if dense, walkable neighborhoods emerge. But they already represent a resounding shift in the perception of urban walkability.