The World Health Organization and the Government of Turkey have launched a new campaign to prevent speeding on Turkey’s roads. “Think About Consequences, Slow Down Your Speed”, released under the banner of the Bloomberg Philanthropies Global Road Safety Programme, aims to reduce the number of deaths and injuries due to speeding. 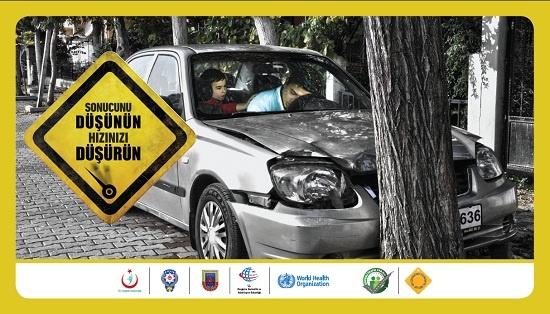 According to the Global status report on road safety 2013, more than 8700 people lose their lives and an estimated 200 000 people are injured in road traffic crashes in Turkey each year. Speeding is considered one of the main risk factors for fatal crashes. Studies reveal that the relationship between speed and injury severity is particularly critical for vulnerable road users such as pedestrians and cyclists.

There is extensive evidence from around the world that road safety campaigns complemented by the strict enforcement of laws can dramatically decrease reckless behavior on the roads.

“Over 8700 Turkish citizens are killed in road traffic crashes each year. The launch of this new social marketing campaign highlighting the dangers of speeding, along with increased police enforcement, will reduce the number of road traffic crashes and unnecessary fatalities and injuries on Turkey's roads," said Kelly Henning, who leads public health programs at Bloomberg Philanthropies. "We support efforts to strengthen The Highway Traffic Safety Law to ensure greater safety on Turkey's roads.”

The campaign is part of a broader effort of a consortium of partners to improve road safety in the country. The Road Safety Project in Turkey focuses on Ankara and Afyonkarahisar and two major risk factors: speeding and seat-belt use. This new speeding prevention campaign will be aired locally for a period of four weeks, and consists of television commercials, radio messages and outdoor and indoor print-ads on billboards and buses. More about the WHO and Turkey Speeding Campaign