According to new research, young people who drive and listen to their favourite music are more likely to drive badly on the road. This includes drivers committing a greater number of errors and miscalculations, according to a new study from Ben-Gurion University of the Negev researchers that will be published in the October issue of Accident Analysis and Prevention. Read more here.

Reported on by Science Daily and shared by Network Member: NOYS in the USA

Do you find your driving change according to the track playing in the car?

When the teen drivers listened to their preferred music, virtually all (98 percent) demonstrated an average of three deficient driving behaviors in at least one of the trips. Nearly a third of those (32 percent) required a a sudden verbal warning or command for action, and 20 percent needed an assisted steering or braking maneuver to prevent an imminent accident. These errors included speeding, tailgating, careless lane switching, passing vehicles and one-handed driving.

Without listening to any music, 92 percent made errors. However, when driving with an alternative music background designed by Brodsky and Israeli music composer Micha Kisner, deficient driving behaviors decreased by 20 percent. 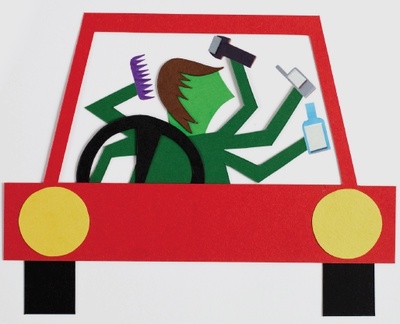 The Youth and Road Safety Action Kit summarizes the types of distractions that occur in the car.

"Most drivers worldwide prefer to listen to music in a car and those between ages 16 to 30 choose driving to pop, rock, dance, hip-hop and rap," Brodsky explains. "Young drivers also tend to play this highly energetic, fast-paced music very loudly -- approximately 120 to 130 decibels."

"Drivers in general are not aware that as they get drawn-in by a song, they move from an extra-personal space involving driving tasks, to a more personal space of active music listening."

In other research into a similar subject. Certain types of music have been shown to be either 'safe' or 'unsafe'. Research has revealed that the songs drivers listen to can influence how safe they are on the roads.

Among the top ten safest songs to drive to is The Scientist by Coldplay. Come Away With Me by Norah Jones, I Don't Want to Miss a Thing by Aerosmith and Tiny Dancer by Elton John also feature.

Each of the songs have an optimum tempo of a song for safe driving, mimicing the human heartbeat at around 60 to 80 beats per minute.The study, also revealed the type of songs that cause motorists to drive dangerously.Music that is noisy, upbeat and increases a driver's heart rate can be a deadly mix. Some of these tracks are explored here.

Fast beats cause drivers to get all excited and take their mind off the road or even to speed up to match the beat. Hip-hop made a female drivers drive far more aggressive drivers, while heavy metal caused the fastest driving among men. The experiment involved eight people driving 500 miles each using the confused.com MotorMate app, which monitored driving behaviour through GPS technology.

But what do you think? What is your safest playlist for driving?