Safer and cleaner road transport is critical for achieving health and development goals around the world, according to a new report that—for the first time—assesses the global health loss from the combined impact of road injuries and pollution that can be attributed to motorised transport.

Entitled “Transport for Health: the Global Burden of Disease from Motorised Road Transport,” the report was prepared by the World Bank-led Global Road Safety Facility and the Institute for Health Metrics and Evaluation at the University of Washington, along with contributions from authors from other institutions.  Findings of the report were discussed on 31 March in London at an event hosted by the Overseas Development Institute and in partnership with the FIA Foundation.

Building on previous Global Burden of Disease (GBD) studies, the report breaks new ground by quantifying the health impacts from injuries due to road traffic crashes over the last two decades, and air pollution from vehicles. Findings show injuries and pollution from vehicles contribute to six of the top 10 causes of death globally.

Combined with the health losses from vehicle pollution, the road transport death toll exceeds that of HIV/AIDS, tuberculosis, malaria, or diabetes, based on GBD data.

The report also highlights the growth in road deaths and injuries globally, and their substantial impacts on maternal and child health. The report confirms that road crashes result in 1.3 million deaths annually and it also highlights an annual total of 78.2 million nonfatal injuries warranting medical care. Road injury is also among the 10 leading causes of death in children ages 1 through 14, and a top five cause of death among women ages 15 to 29. 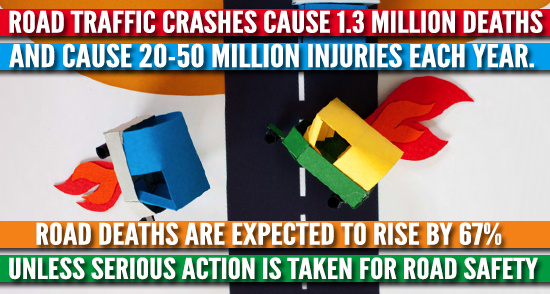 In his forward to the report, World Bank President Jim Yong Kim writes: “This is a powerful wake-up call… these alarming findings underscore the urgent need to spread improvements in transport pollution and safety across world regions. Road crashes cost an estimated 1 to 5 percent of GDP in developing countries, undermining efforts to reduce poverty and boost shared prosperity.”

“Transport for Health” calls for increased collaboration of the transport, health, and urban sectors, among others, to achieve sustainable transport and health policies, noting that the benefits of road safety and air quality improvements outweigh their costs, thus making a compelling case for urgent action.

"Health officials are typically viewed as the chief stewards of countries’ population health, but reducing the burden of disease from motor vehicles requires action from multiple sectors,” says Christopher Murray, Director of the Institute for Health Metrics and Evaluation. “As demand for cars and roads increases, the transport sector plays a vital role in designing, building, and maintaining an infrastructure and regulatory system that encourage economic growth while minimising health loss.”

The report describes how the health burden associated with road transport spreads with economic growth and rapid motorisation, and notes that mitigating this risk requires a long-term investment strategy to build the capacity of national institutions so they can better manage safety and mobility performance.

FIA Foundation Director General Saul Billingsley was on the panel to launch the report. He said:

“This research serves as strong confirmation that the health impacts of road transport must be included in the emerging post-2015 agenda for global development. The current paradigm is unsustainable and comes at a cost to society and human health that is entirely unacceptable. We must take advantage of this report and ensure that it becomes a starting point for a new approach that puts people first.”

The report reveals the extent of the global health impact of road transport. It shows that:

The report sets out a series of policy recommendations. It emphasises that there is a strong financial case for investment in road safety with losses equivalent to 1%-3% of GDP per annum rising as high as 4-10% for some countries. The report recommends investing in national road safety agencies with legislative powers, safe road infrastructure and vehicle safety, enforcement and social marketing campaigns.

Read about the Safe, Clean, Fair and Green Agenda for the Post-2015 development agenda.

The report acknowledges that in investment plans for road projects, more effort is placed in estimating economic return than social benefit or social harms. Comparable efforts to quantify the full costs and benefits must be made. Analytical models of crash causation are needed. Similarly analytical models to characterise vehicle emissions that accompany road projects are needed.

A ‘multi-sectoral’ approach to address the health impacts of transport is needed, the report says. In particular promoting ‘active transport’ – walking and cycling –  is key. However, these programmes can make people vulnerable to road injury. Programmes are most successful when they employ an integrated approach that includes providing safe infrastructure such as sidewalks and bike lanes, supportive land use planning, and advocacy and education.

For air pollution, emissions controls technologies, catalysts and particle traps, and global agreement to lower sulphur content will be of critical importance, it concludes.

Click here to read the Transport for Health Report.