More than 1.2 million adolescents die every year, nearly all preventable 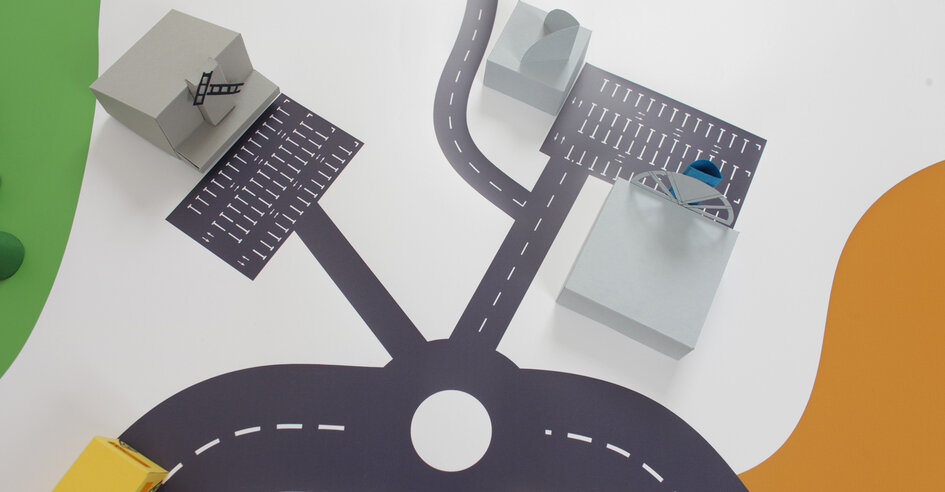 More than 3000 adolescents die every day, totalling 1.2 million deaths a year, from largely preventable causes, according to a new report from WHO and partners. In 2015, more than two-thirds of these deaths occurred in low- and middle-income countries in Africa and South-East Asia. Road traffic injuries, lower respiratory infections, and suicide are the biggest causes of death among adolescents. 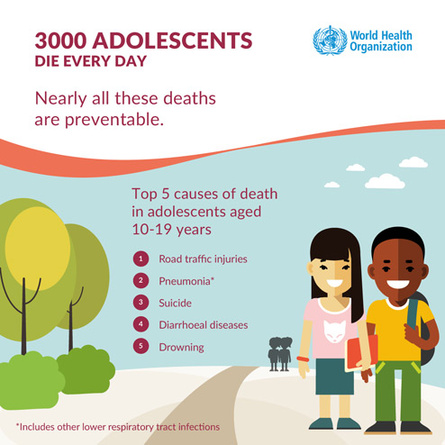 Most of these deaths can be prevented with good health services, education and social support. But in many cases, adolescents who suffer from mental health disorders, substance use, or poor nutrition cannot obtain critical prevention and care services – either because the services do not exist, or because they do not know about them.

In addition, many behaviours that impact health later in life, such as physical inactivity, poor diet, and risky sexual health behaviours, begin in adolescence.

"Adolescents have been entirely absent from national health plans for decades," says Dr Flavia Bustreo, Assistant Director-General, WHO. "Relatively small investments focused on adolescents now will not only result in healthy and empowered adults who thrive and contribute positively to their communities, but it will also result in healthier future generations, yielding enourmous returns." 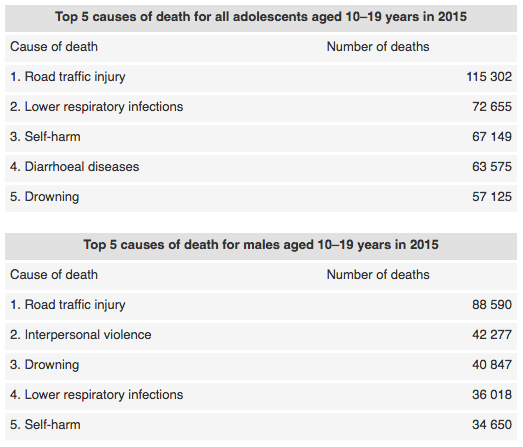 Data in the report, Global accelerated action for the health of adolescents (AA-HA!): Guidance to support country implementation, reveal stark differences in causes of death when separating the adolescent group by age (younger adolescents aged 10–14 years and older ones aged 15–19 years) and by sex.

The report also includes the range of interventions – from seat-belt laws to comprehensive sexuality education – that countries can take to improve their health and well-being and dramatically cut unnecessary deaths.

In 2015, road injuries were the leading cause of adolescent death among 10–19-year-olds, resulting in approximately 115 000 adolescent deaths. Older adolescent boys aged 15–19 years experienced the greatest burden. Most young people killed in road crashes are vulnerable road users such as pedestrians, cyclists and motorcyclists.

However, differences between regions are stark. Looking only at low- and middle-income countries in Africa, communicable diseases such as HIV/AIDS, lower respiratory infections, meningitis, and diarrhoeal diseases are bigger causes of death among adolescents than road injuries.

The report helps countries implement the Global strategy for women's, children's and adolescents' health (2016–2030) by providing comprehensive information needed to decide what to do for adolescent health, and how to do it. The Global strategy, which was launched in 2015 to support the Sustainable Development Goals (SDGs), provides an opportunity to improve adolescent health and to respond more effectively to adolescents’ needs.