Billionaire Michael Bloomberg said Monday he will donate $125 million over the next five years to help reduce the rising number of road deaths worldwide — especially in large cities in poorer nations around the world. Bloomberg has been supporting road safety for many years now through his philanthropic work with Bloomberg Philanthropies.

In 2010, 1.24 million people were killed in road deaths, accounting for the leading cause of death worldwide for people age 15-29. 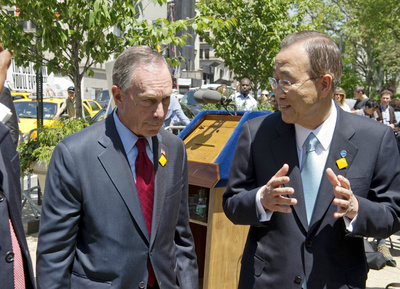 Michael Bloomberg has been supporting road safety before the start of the Decade of Action for Road Safety.

“Every life lost because of unsafe roads is a tragedy — and most of those tragedies could be avoided with better rules, better enforcement, and smarter infrastructure. City governments can be especially effective at putting those measures in place because they are often able to move faster and more efficiently than other levels of government,” said Michael R. Bloomberg, the former New York mayor.

“This new funding will be targeted to cities where we can make the biggest difference, that have shown the strongest commitment to taking action, and that have the best ideas for making roads safer. And we’ll help those cities work together to share effective strategies — so that even more lives can be saved.”

It comes as automakers expect a massive jump in auto sales in coming years. Ford Motor Co. thinks worldwide auto sales will hit 110 million by 2020 — up from 85 million today.

Bloomberg Philanthropies has been working on road safety since 2010 and launched a new five-year-effort by its Global Road Safety initiative, “which aims to reduce fatalities and injuries from road traffic crashes. The foundation will invite select low- and middle-income cities with populations of over two million residents to apply for grants. Low- and middle-income countries will also be invited to be part of the program.”

The next round of locations funded will be announced by January and each that win will get senior-level, full-time staff to work within city governments on road safety plans for up to 5 years, comprehensive technical assistance from the world’s leading road safety organizations, training for police and other relevant staff and support to create mass media campaigns.

Michael Bloomberg with the Mandela Family and Grover on the launch of the Decade of Action for Road Safety.

“The program will work at both the national level to strengthen road safety legislation and the city level implementing proven road safety interventions. The proposals cities submit will detail how they plan to address road safety by applying solutions to a number of challenges including improving pedestrian and cyclist safety, enhancing laws to combat drinking and driving and speeding as well as encouraging the use of motorcycle helmets, seat-belts and child restraints.

While road deaths in the United States have fallen by about 25 percent since 2007, they are unchanged worldwide. But there are now 15 percent more vehicles worldwide to 1.6 billion — suggesting that some improvements in road safety have been made. 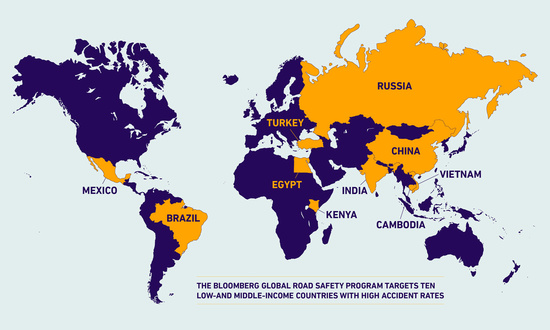 In the United States, the speed limit in most urban areas is 25 mph or 30 mph. Just 59 countries covering only 39 percent of the world’s population have adopted speed limits of 31 mph or lower in urban areas. Fully half of all countries set speed limits nationally and don’t let local communities lower them in high population areas, a 2013 United Nations report said.

Worldwide, 77 percent of those killed in crashes are men and 60 percent are age 15-44. Half of the world’s road deaths are among pedestrians (22 percent), bicyclists (5 percent) and motorcyclists (23 percent.) In the U.S., those three categories account for about 30 percent of road deaths.

Another big issue is many buyers of cars in poorer countries don’t have the safety features — like advanced airbags, electronic stability control and strong vehicle structures — that vehicles wealthier countries have.