As the world reflects on Nelson Mandela’s legacy, we give thanks for his life, his leadership, his devotion to humanity and humanitarian causes. We salute and thank him for his sacrifices for our freedom and our future. Mandela day offers people an opportunity to take action and in his name, The Zenani Mandela Campaign continues to promote the cause on an international platform.

Zoleka Mandela, the granddaughter of Nelson Mandela, has called for road safety to be part of the new global development goals in a film for MY World, the UN’s worldwide campaign encouraging people to vote for their priorities.

The film was released to mark ‘Mandela Day’, Nelson Mandela’s birthday, which is a global day of public service. The MY World initiative is being promoted worldwide as part of Mandela Day which is held on 18 July but with events running for much longer around the date. In her film, Zoleka Mandela rallies support for the post-2015 agenda and highlights the campaign she is backing for road safety to be part of the UN’s new development goals.The film is being pushed out on social media by MY World which currently has over 2 million votes worldwide. Zoleka Mandela said

“I have been campaigning to combat the biggest killer of young people, road traffic injury. It is a huge burden on developing countries. But we can defeat it. Just a simple target on road safety in the new goals would save millions of lives. We can and we must take action.”

The piece was recorded ahead of Mandela Day at the Sivile Primary School in South Africa’s Western Cape. Sivile Primary is running a ‘Safe Schools’ project launched by the Road Safety Fund and supported by the FIA Foundation to reduce road traffic injury with safe infrastructure and education. 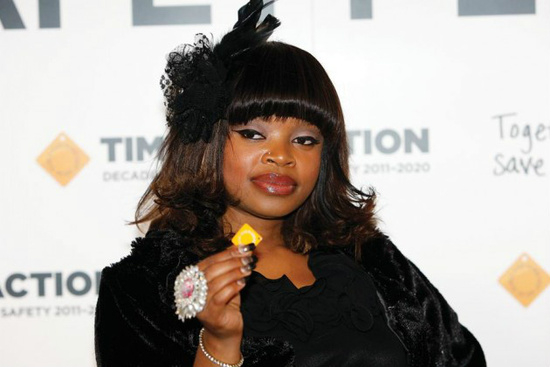 Supported by Zoleka Mandela and her family, the campaign calling for road safety to be included in the new development goals has made important progress.

The latest draft proposals compiled by Governments at the UN, has included a global target to halve road traffic fatalities by 2030 within a suggested Health Goal. This development is the result of coordinated advocacy and sustained campaigning led by the FIA Foundation and the Make Roads Safe campaign.

A draft set of proposed Sustainable Development Goals (SDGs) will be submitted to the UN General Assembly in September and this will be a major milestone in a long process to design the new development agenda. There is still much campaigning to be carried out, with a final set of SDGs eventually due to be launched in September 2015.

Zoleka Mandela and her family have been campaigning for global road safety in memory of Nelson Mandela’s great-granddaughter Zenani, who was killed in a car crash when she was just 13 years old. 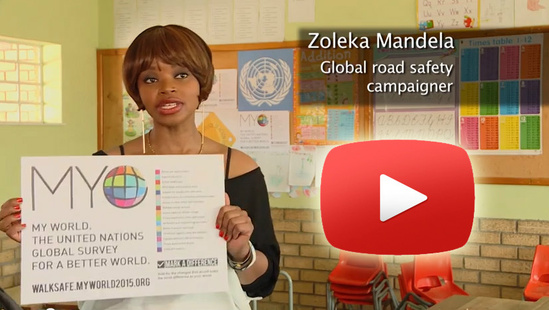 Click here to watch Zoleka Mandela's Video for MY World

For more on the campaign, to vote for ‘better roads and transport’ and to call for your Government to support the road safety target at the UN  visit www.targetsavelives.org