Life and death on the world's most dangerous roads - The Guardian

The Road Safety Fund, in partnership with the Guardian, publish articles focusing on global road safety as a development issue. Since the the publishing of the Global Staus Report on Road Safety 2013 last week, the Guardian have created an acessible and easy to navigate interactive map highlighting key statistics around the world from the data compiled in the report. Read more here.

More than 1.2 million people are killed on the roads every year and three-quarters of all road deaths are among young men. Where are the worst places for road deaths and injuries? What is being done to improve the highways for pedestrians, cyclists and drivers? Explore data from the WHO's latest report on road safety, and experience a ride on one of the world's most dangerous roads.

This makes road crashes the eighth leading cause of death globally – comparable in impact to communicable diseases such as malaria – and the WHO estimates it could rise to fifth in the rankings by 2030 unless action is taken.

"Road traffic injuries take an enormous toll on individuals and communities as well as on national economies. Middle-income countries, which are motorising rapidly, are the hardest hit".

Three-quarters of all road deaths are among young men – and road accidents are the leading cause of death for 15- to 29-year-olds.

The WHO's Global Status Report on Road Safety 2013 found that 27% of global traffic deaths are among pedestrians and cyclists – vulnerable road users who have been neglected in transport and planning policies. In low- and middle-income countries the figure is closer to 33%; in some, it is as high as 75%.

Margaret Chan, director general of the WHO, said the number of road deaths was "unacceptably high", while injuries "take an enormous toll on individuals and communities as well as on national economies". Low-income families are hardest hit by medical costs and lost wages.

The Guardian Development have translated the data from the Global Status Report into an interactive and comparable table looking at the statistics from the report. It can be viewed here: 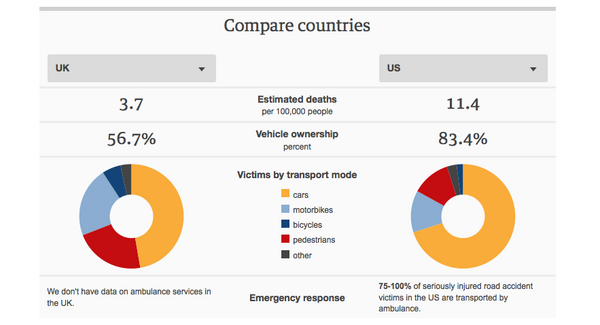 "Road traffic injuries are increasing, notably in low- and middle-income countries, where rates are twice those in high-income countries. This is partly attributable to the rapid rate of motorisation in many developing countries without a concomitant investment in road safety strategies and land use planning," said the report.

The WHO named six countries that have steadily reduced road deaths – Australia, Canada, France, the Netherlands, Sweden and the UK. It said 88 countries reduced deaths on the road between 2007 and 2010 (42 high-income, 41 middle-income and five low-income countries), while 87 experienced increases. The WHO refused to name the countries where rates had increased.

The report found that the number of annual deaths on the world's roads was more or less stable, at 1.24 million, but said that – given the number of registered vehicles has risen 15% since its last report in 2009 – more people would have died without the action already taken to reduce risk in five key areas.

World governments declared 2011-20 a decade of action for road safety and the WHO has been urging countries to tighten legislation on speed, drink-driving, use of helmets, seatbelts and child restraints.

"Although the aim of reducing the annual burden of road traffic deaths has yet to be realised, the lack of increase suggests interventions to improve global road safety may have mitigated deaths that would otherwise have occurred," the report said.

The road safety study found that only 28 countries, covering 7% of the world's population, have adequate laws in place – and this number remains unchanged from the last report. Over the past five years, 35 countries have passed new laws or changed existing laws – but even where laws do exist, their enforcement is inadequate, the report found.

The report also calls for standardised data collection on road safety, injuries and deaths – and highlights the need to improve post-crash care.

"Real progress has been made towards improving road safety and saving lives, but what this report shows is that faster and more concerted action is needed to prevent many more lives being needlessly lost on the world's roads," the authors said.