Read the original article by Piyush Tewari at The Guardian here.

On the afternoon of 5th April 2007, my 16-year-old cousin Shivam was doing what he did almost every day at that time, walking back from school. Though this particular day was to be his last. He was struck by a vehicle while crossing the road and left seriously injured. He managed to drag himself to the side of the road and for the next 30 minutes begged passers-by to help him. While hundreds stopped, not one person came forward to assist him or even call for help. He died of treatable injuries.

The circumstances surrounding his death became unacceptable to me. I learnt soon after that his death was not an isolated incident and that thousands of road crash victims in India die every year of treatable injuries, by the side of the road. They never get any assistance. Bystanders, who would otherwise become first responders to victims of natural disasters and even terror attacks, remain mute spectators to victims of road crashes.

The roads in India serve as a major hazard to children and other vulnerable road users.

They fear police harassment, detention at hospitals and prolonged court proceedings, as confirmed later in a national study conducted by an organisation I established to tackle the issue. SaveLIFE Foundation (SLF) was my response to the disaster that road crashes had become in India, having affected millions of families including mine.

In 2009 we built a system to connect volunteers, police officers and hospitals through a mobile phone-based technology. This model to train, connect and mobilise police personnel and citizen volunteers won the Rolex Award for Enterprise in 2010 and was rapidly adopted by the Indian government. To date, 150,000 injured persons have been rushed to various hospitals under this model with a survival rate of over 98%.

In parallel, SLF also secured a judgment from the Supreme Court of India, which ordered the Indian Government to take appropriate and immediate action to protect Good Samaritans who help injured persons. The idea is to ensure that any citizen can become a rescuer with a supportive institutional environment.

Working closely with police, hospitals and road crash victims gave us a unique exposure to the “actual” causes of road crashes in India. For instance, a tendency to blame road crashes on the the Indian way of driving meant that most interventions led to spreading “awareness” among drivers. The actual problem, meanwhile, lay in the institutional process (or lack of it) that allowed untrained drivers to get on the streets without any credible testing. The entire filtration process was compromised.

Another actual cause of crashes – faulty road design and engineering – was rarely looked at as an issue. I discovered that the law governing road safety in India was so deeply fractured that not only did it not address the causes of road crashes but contained statutes that would in fact lead to horrific crashes. No wonder in the past decade more than 1.2 million people have been killed in road crashes in India and over five million left seriously injured or permanently disabled.

I soon established the Policy Advocacy practice at SLF and began to demand complete institutional change. SLF built a six-pronged strategy to campaign for this change. The elements of this strategy ranged from building public pressure around the issue to forming alliances with like-minded organisations and invoking the Supreme Court of India to bring seek interim relief and attention to the issues. During this period we faced tremendous difficulties – from official apathy and lack of funding to death threats issued to me by mafia involved in the transportation business who would get directly “affected” by our work.

We pushed through, got enormous support from public and media, and in June 2014, the Government of India agreed to our demand to repeal the old road safety laws and replace them with a comprehensive legislation. The key element of this legislation would be the establishment of an independent, empowered lead agency, which would finally take ownership for road safety in India and create sustainable interventions in each of the root causes responsible for the high number of road crashes in India.

SLF was invited to contribute to the drafting of the bill and the draft legislation was finalised for introduction in parliament in December 2014. The bill is expected to be passed by the Indian parliament shortly. The next challenge would be to ensure that it is enforced across India and institutional mechanisms established at local levels to achieve that. 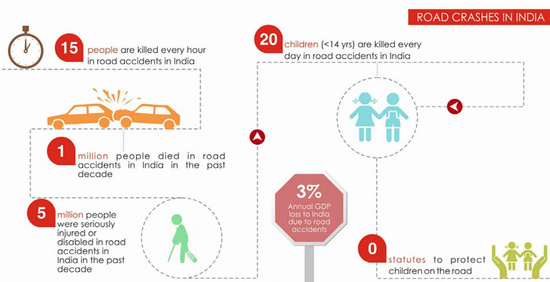 Today SLF’s model is clear – we will fight for long-term institutional change and build on-ground proofs of concept. Just like our on-ground model of emergency care has been adopted for replication, our other interventions too will be designed such that institutional replication becomes possible.

The vision of SLF is not to become the largest NGO in India. It is to reach a stage where it will not be required to exist, having achieved its mission. The fight to get there through positive, deep and lasting impact continues.

Piyush Tewari is CEO and founder of the SaveLIFE Foundation. He was made a Rolex Awards for Enterprise Young Laureate in 2010 for his work in the field of science and health.