Read the original article at the FIA Foundation by Avi Silverman

The advocacy effort calling for road safety to be included in the post-2015 Sustainable Development Goals (SDGs) is showing signs of progress, but the critical work lies ahead with UN negotiations building momentum over the coming months.

At the UN, the process to negotiate the SDGs has entered its final stages. A stocktaking session was completed in January, with work on the text of the opening declaration for the SDGs due to start on 17 February. Negotiations on the substance of the goals and targets will then commence in March with the concluding sessions over the summer.

Read about YOURS involvement int he Post-2015 Development Agenda

So we are at the start of the final and most important phase, the culmination of the long-running process to establish the global development agenda for the next 15 years. For the inclusion of road safety in the SDGs, the outlook is positive but the stakes are high. Progress had been made over 2014, and inclusion of road safety in the two most important UN reports on the SDGs means that the issue has a place at the negotiating table.

The UN Secretary General’s ‘Synthesis Report’ on the SDGs together with the draft SDGs from the UN’s Post-2015 Open Working Group (OWG) will frame the upcoming negotiations between Governments at the UN.

In his Synthesis Report, UN Secretary General Ban Ki-moon called for the post-2015 agenda to address ‘road accidents’ alongside other major health concerns such as AIDS and tuberculosis, non-communicable diseases and water, sanitation and hygiene. This followed the OWG draft goals which specifies the target (3.6) within a Post-2015 Health Goal to halve global deaths and injuries from road traffic accidents. This is reinforced in the Cities Goal where target 11.2 calls for safe, affordable, accessible and sustainable transport systems.

The fact that road safety was included in both of these influential reports, means that the issue will be given due consideration during this final and critical negotiating phase. The task ahead is to ensure that during the rounds of negotiations Governments support the target to halve road fatalities in a Post-2015 Health SDG.

The advocacy effort through 2014 taken forward by a broad and effective coalition succeeded in rallying support from Governments at the UN. The FIA Foundation, together with the FIA and its member clubs, along with partners from across sectors including the NCD Alliance and the Partnership on Sustainable Low Carbon Transport (SLocAT) worked hard to advocate for the road safety SDG target throughout last year. The coalition certainly had an impact as reflected in the proposals from Ban Ki-moon and the OWG. Indeed, the message has also started to get through to mainstream development organisations with major influence at the UN.

In January, the group of ‘Child Focused Agencies’ convened by UNICEF and including Save the Children, World Vision, and the ChildFund Alliance were briefed on the need to include a focus on child road injury in their post-2015 advocacy. The new global partnership between UNICEF and the FIA Foundation will play a key role in taking the advocacy forward with this group. UNICEF has highlighted road safety as one of the Post-2015 ‘targets of crucial importance to children’.

This work must now be taken forward over the next few months, and it is the ‘#SaveKidsLives’ campaign that provides the platform for a big advocacy push. #SaveKidsLives focuses attention on why we need the road safety target. It is an agenda to protect the most vulnerable, our children who are on the front line of the global epidemic of road traffic injuries. All too often, they are the innocent victims of an unsafe system, one which neglects the human dimension of development. 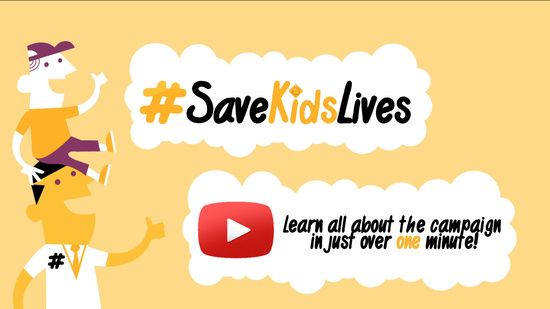 The campaign provides the opportunity to mobilise support for road safety both nationally, and globally. It’s an opportunity to call for real action, a post-2015 SDG target to halve road fatalities, to combat a major and growing burden on young people, to save millions of lives.