Long standing friend of YOURS and international road safety advocate Mr Harman Singh SIdhu single handily took on the might of Liquor Mafia, well supported by the State and Politicians, to seek removal of liquor shops dotting the Indian Highways. Right out of a Bollywood movie, facing threats to life, being chased by the goons while out to get photographs as evidence, he carried on supported by a core team of his NGO, ArriveSAFE.

Wheelchair bound Harman fought for more than two and a half years and finally got Orders from the High Courts for removal of Liquor Shops from Highways of three States, Punjab, Haryana and Rajasthan. Now, ArriveSAFE is working on getting enforcement stepped up. Sample this; half of Punjab’s districts have not issued a single ticket for drunken driving in the past two years. Harman wrote this article for YOURS to share the struggles of working to follow through on a campaign but shows that hard work and resilience pays off in the end. 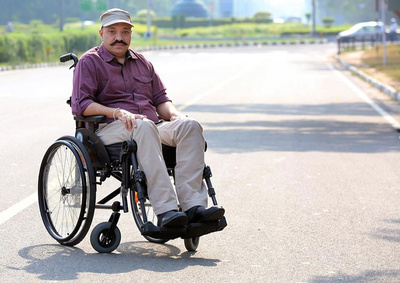 Harman became an international advocate for road safety after being in a crash himself.

Drink driving - a know cause of road crashes
India has the highest number of deaths due to road crashes in the World. As per WHO reports; drink driving is one of the main contributing factors. Studies confirm that Alcohol results in impairment, which increases the likelihood of a crash since it produces poor judgment, increased reaction time, lower vigilance and decreased visual acuity. Apart from its direct impact on crash outcomes, alcohol is believed to affect other aspects of driver safety such as seat-belt wearing, helmet use, and speed choice etc. Source: World Health Organization - Global Action Plan for prevention & control of noncommunicable diseases 2013-2020).

Indian Roads: Free availability of alcohol along high ways
The mission started in April 2012 when we started collecting information through the RTI (Right to Information) and got startling data, “185 liquor shops on a 291 kilometres stretch of National Highway 1 in the North Indian States of Punjab & Haryana.” One liquor shop every 1.5 kilometres. If one drives at the National Speed Limit of 90 Km/Hr, one would come across a well-decorated liquor shop every one minute tempting the driver to stop for a drink.

Similarly, all National and State Highways were dotted with Liquor Shops open virtually 24 hours a day. Most of them so close to the road that one just stretches out an arm out of the window and get a bottle. There were “Government approved Taverns” situated next to the liquor vends prompting the road users to drink. With such easy availability we cannot expect the negligible Police Force for Enforcement on drunken-driving to give good results.

Glaring facts came to our notice like, if a Liquor Shop remains operational at a given location for one year, the shop can operate from the same location for coming years with immunity. All these Liquors Shops were “unauthorized” as they had not even taken the mandatory permissions.

Step One: Requested States to Close These Liquor Shops
Armed with the information supported by data, we met the Ministers and Senior Officers of the State Governments requesting them to amend the Excise Policies so Liquor Shops are not setup along the Highways.

To my utter surprise, instead of a positive response I started getting threats to my life. Besides this the Government officials expressed their “inability” to act against the powerful businessmen and justified the location by saying that the States got millions of dollars per year through Excise Tax that was utilized for welfare activities. They were completely insensitive towards the lives being lost and families getting shattered due to the avoidable road crashes.

We shared the data collected and the studies conducted with the leading media houses and then carried lead stories on how the Government is conniving with the businessmen and risking lives of commuters.

Buying liquor at the road side while driving has become a frequent occurance on Indian roads.

Step Two: Seeking Relief From The Court
The only option left was to knock the doors of the Hon’ble High Court of Punjab and Haryana, we strengthened our petition by citing International and National Studies and Reports by WHO, GRSP and NIMHANS (National Institute of Mental Health and Neuro Sciences) etc. along with photos of the liquor shops situated along the Highways to show the reality in the Court.

We filed a Public Interest Litigation in the Court in December 2012 and on 18th March 2014 the Bench headed by the Hon’ble Chief Justice passed the final and a landmark judgement Ordering that the Liquor Shops should neither be Accessible nor Visible from the Highways (Both National and State) implying that they would cease to exist along the Highways.

More than 80% of the liquor shops along the Highways have been closed, a success, which is hard to believe.

ArriveSAFE filed a similar Petition in the High Court of Rajasthan and got a boost when the Court in its Order dated 15 January 2015 stated that Liquor Shops should be removed from Highways forthwith.

Step Three: Supreme Court Endorses the Order
The States moved the Supreme Court seeking permission to be allowed to run liquor shops, at least on State Highways. “A blessing in disguise” as per Sidhu as the Supreme Court Orders would be applicable all over the Country. We expect a Positive Order in the next hearing, which hopefully should be the final.

The Bench in the previous hearing observed, “…if it is valid for national highways, it is valid for state highways also. What is good for the Centre is good for the states as well. It is a good idea not to allure highway users into drinking and driving. If there is a reasonable method, which the governments want to adopt, we have no difficulty in approving it. At the end of the day, it is for the good of society at large.”

The Way Ahead: Generating Awareness on the Consequences of drunken driving and getting enforcement stepped up.
Daily, 25 lives are snuffed out on the roads of States of Punjab and Haryana, drunken driving being one of the major contributing factors. The Police have 111 Alco meters but only 65 are in working condition and merely 55 (3.5% of the total force of district) deployed in traffic wing while 1,575 are deployed for handling law and order and VIP duties.

Sign reads 'Alcohol bar up ahead, buy English and Indian liquor and cold beer' enticing drivers to stop for a drink.

A study with 2113 respondents revealed that 97% believed that that driving under the influence of alcohol was “unsafe”, still 46.6% respondents admitted to have driven after consumption. 43.5% agree that they have travelled in a public vehicle where the driver had consumed alcohol confirming the role of alcohol in road crashes. 88% of the respondents from Punjab and 73% from Haryana felt there is little chance of being caught for drunken driving confirming negligible enforcement.

You cannot make an entire mass of road user fall in line with negligible enforcement and lack of knowledge. ArriveSAFE has started an awareness campaign in the States of Punjab and Haryana named “Project Hosh-Yaar” (Be in senses while driving, my friend). Awareness campaigns are being conducted in coordination with the Punjab and Haryana State Road Safety Councils and setting up local Road Safety Clubs that would initially focus on Drink Driving, to start with. Efforts are also being made to get enforcement strengthened.

The Awareness and Advocacy for Enhancement of Enforcement is being done under the Grants program of RS10 Project.
The Project for Removal of Liquor Shops from Highways is totally self-funded.

See YOURS' Spotlight on Harman's work in India.

YOURS congratulates Harman for his tireless efforts in changing the infrastructure on India's roads to prevent this leading risk factor stepping into the vision on drivers. Of course, these efforts will resonate across the board, especially with youth who are seeing a continued demise through alcohol abuse. We anticipate further positive results alongside Arive Safe's policy to educate the masses on the effects of drink driving.