According to the Telegraph newspaper, nearly half a million females are involved in a road collision in the UK due to distracted driving in the form of applying make-up while behind the wheel. The statistics have been gathered by a women's motor insurance company. Now, campaingers have created a new campaign to address this issue with a simple message; don't make-up and drive.

In the grand scheme of road safety issues facing young people, young males remain the most affected group in road crashes and are disproportionately represented in global road deaths. While the campaign is unlikely to dramatically change our key focus on addressing road safety for young females applying make-up, its approach is unique and well thought-out.

Of course, the issue idenfitied here is relative to time a place and is most likely an issue facing the Western world related to social and cultural contexts. What is interesting is the approach taken to address the issue. The creative and unique campaign identifies its target audience well and utlizes that place where these young budding make-up artists spend a lot of their time; on youtube haul channels i.e. make-up tutorial videos that teach the ladies the stylistic applications of make-up for the secrets of glamorous looks. The result is a unique road safety video that addresses the issue head on.

The creative video identifies its audience and uses a unique route to deliver a road safety message.

Beautician Nikkie de Jager is just 17 years old, yet her YouTube tutorials about how to put on make-up has garnered more than 28 million views.Now she's using her internet fame and teamed up with DDB Tribal and Volkswagen to create a video warning women not to drive while putting on make-up.She explains how to spice up eye make-up with gem stones when she suddenly is thrown forward as if she had been in a car crash.

NRMA spokesman Peter Khoury said putting on make-up was a clear driver distraction - but it was one of many. “It’s no different to eating a cheeseburger or playing with your iPod. This is what people do. Once you start doing these things your attention is taken off the road. It reduces your capacity to drive properly” Mr Khoury said.

By using a route that is popular with their target audience, the video has already amassed nearly half a million views. A lesson we can indeed learn from this campaign is to 'think outside the box' in addressing a road safety issue. Viral videos are incredibly powerful in the modern media age in delivering a message and so far, the video is potentially reaching hundreds of thousands of this particular target audience. What is needed, however, is a built in system that enables evaluation of the impact of this video alongside appropriate education and where necessary, rules and enforcement to curb distracted driving. 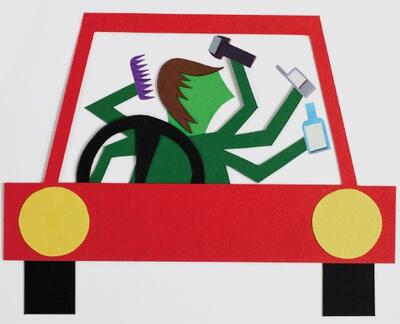 Our Youth and Road Safety Action Kit places a focus on distracted driving as a key risk factor.

Did you know that: There are four types of distraction?

The video is available to view in the right column.

A Crash Course to Shine