Concrete action underway in Belize after Training of Facilitators

Its only been around 4 months since the YOURS Training of Facilitators took place in Belmopan, Belize in partnership with the Caribbean Development Bank and the Government of Belize. In such a short time, the 19 youth that underwent the training programme have started delivering concrete results in their country.

The Belizean Youth for Road Safety (BYRS) is made up of young, dynamic and motivated individuals with a passion for delivering the road safety message across the country of Belize starting with the demonstration corridor of the Belize Road Safety Project, doing their part to save lives.

"We are a newly formed NGO and our Mission Statement is Youths encouraging, empowering and inspiring others to become advocates of road safety by generating awareness using innovative and interactive activities to reduce the numbers road traffic deaths and injuries in Belize".

Their Vision Statement is to “Generate and sustain road safety awareness by promoting appropriate behavioral skills and attitudes to improve road user behaviour through education and publicity and to increase community participation and commitment to road safety practices”. Their main objective is targeting a minimum of 2000+ youth between the ages of 16-29 to disseminate workshops with a youthful vibe/ youth friendly manner that will assist in the learning of Drunk Driving, Distracted Driving, Speeding and get them to understand the concept of the importance of Road Safety in Belize.

Updates:
Orientation at University of Belize, Belmopan and Punta Gorda Campuses
In July 2014 the youth were invited by the University of Belize to attend and participate in a four day orientation that was held in Belmopan. It was scheduled from (July 28- July 31) and on 1st August 2014 we travelled to the University of Belize’s Toledo Campus. During that time (BYRS) members participated in the orientation there and showed their drive in presenting to the newly devoted college students about the importance of road safety through charts, flyers, testimonial and other road Safety Videos  any why they should carry on with it and try to spread the word in their everyday lives. We reached over 2,700 young men and women between the ages of 16-29 years.  In addition, thery reached over 700 men and women thirty years and older. 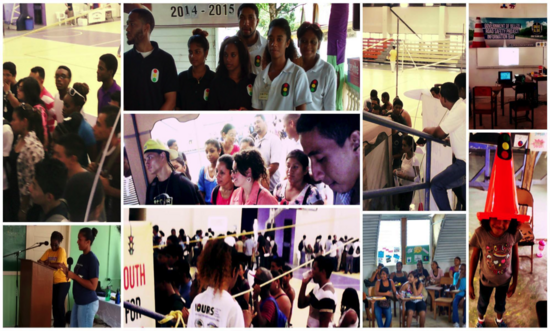 Trained facilitators at the Univesity of Belize

International Costa Maya Festival
During the month of August 2014, the youth made their appearances once again in the public to create awareness but at the International Costa Maya Festival in San Pedro as a part of their initiative to help educate road users both young and old about the importance of road safety. They had an information booth set up for viewers along with plenty games and ensured that we were visible. They also had “one-on-one” conversation with people who would visit the booth and ask about our target.  The youth reached approximately 500 young men and women between the age of 16 to 29, 35 boys and girls less than 15 years old and approximately 100 men and women thirty years and older. 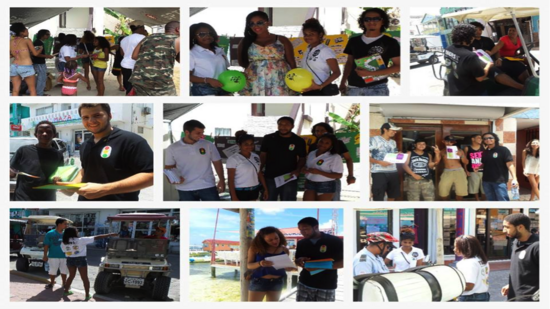 Annual Expo
In the month of August 2014 the BYRS obtained and utilized a booth at The Annual Expo Belize market place. They further introduced the group’s focus and commitment in creating road safety awareness to reach a much larger audience, people of all ages attended this annual event and they strongly believe that the message we have delivered benefitted everyone some way or another. Approximately 19,000 persons were recorded by the Belize Chamber of Commerce for this event and it is believed that approximately 40% (7,600 males and females approximately) of these persons visited the booth.  Of the approximately 40% that visited the booth, approximately 34% (2,584) were our peers. This was a well organized event and their aim is to partake on an annual basis. 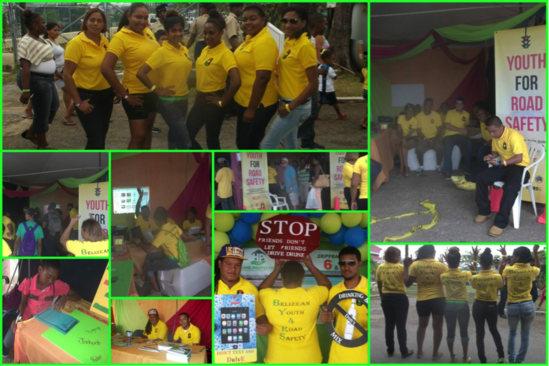 Police Recruits
The Belize Facilitators reported, "The turnout for the workshop was amazing; the energy from the participants was exhilarating. At the Police Training Academy, the young recruits were well mannered and eager to learn, the facilitators could not have asked for a better group of people. As we prepared the room with posters and other materials needed for the session, extremely nervous and excited, we kept in mind that this workshop was very important, not only will it be educating our peers and having fun but that these are future police men and women, law enforcers! These participants will be able to connect to others on a whole new level depending on what we had to inspire and motivate them.  As we planted the seed that road safety is everyone’s business and responsibility it wad heart warming to see the feedback and listen to the views that came from these new intelligent law enforcer’s minds. At the end, it was overwhelming to know that by sharing the things you know can help save one life". 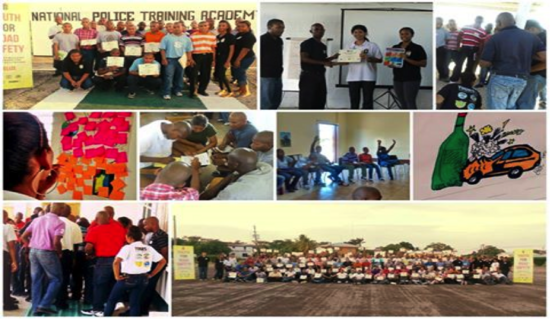 Radio Show
Juan Caal and Quincy Jones are leading the awareness campaign on Road Safety in the South where they are hosting a series of talk show on one of the most “tuned into” radio station in the Toledo District: Ak'kutan Radio 96.1 FM. They host a Monday and a Thursday radio show from 5:00 p.m. to 6:30 p.m.  This effort has successfully educated and touched the lives of over 10,000 persons in the Toledo District where the sensitization of people is hard to attain. 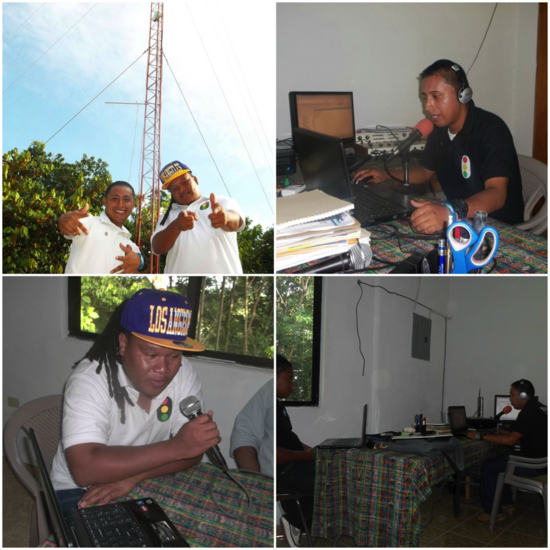 Quincy Jones aka "Fada Cue" and Juan Caal on their regular radio show for road safety.

As you can tell, the youth in Belize are incredibly passionate abou the cause and are championing road safety in the own unique youth style. The told us:

"The Belizean Youth for Road Safety (BYRS) remains committed to generate and sustain road safety awareness by promoting appropriate behavioral skills and attitudes to:  (1) improve road user behaviour through education and publicity; and (2) increase community participation and commitment to road safety practices.  BYRS has reached over 3,200 of its peers, 35 boys and girls and approximately ___ men and women over thirty years and older.  As per commitment with the Government of Belize and the Caribbean Development Bank, BYRS has met approximately 19.25% as of ending September 2014.  The aim is to transfer knowledge to the 2,000 young men and women between ages 16 to 29 years of age by December 2014. This process will no doubt create a multiplier effect and the information transferred to our peers will reach the homes and communities".

More reports are due to come at the end of the year!