Checklist of safety rules for the road during winter - Cyclist focus

As the winter period sets in the Western hemisphere of the world, dark mornings, dark afternoons and icy conditions make driving on the road difficult. As a vulnerable road users, cyclists are at even more risk on the road. Here are some tips for cyclists.

During the winter period, road become more dangerous as condition become icy, slippery and visibility is reduced. For cyclists, this can be a very dangerous period as vulnerable road users.

Cyclists should adopt the ‘Coast’ road safety principles, a check-list of measures aimed at saving lives and reducing casualties on our roads: 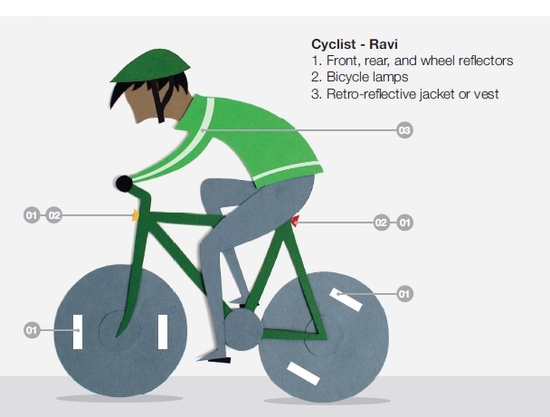 It is also important for cyclists to be visible on the road during dark mornings and dark afternoons.

Star comment: Think bike and protect cyclists - From Shropshire Star - UK
The dark mornings and dark evenings of the winter spell extra danger for cyclists. They are out on two wheels with their environmentally friendly method of travel which also ticks the boxes for keeping fit and healthy. They rub shoulders in the gloom with impatient cars and lorries who often do not overtake so much as squeeze by.

Into this cocktail of deadly risk venture youngsters pedalling their way to school. Even the most experienced are in danger, as evidenced by the fact that Tony Hewson, an 80-year-old former Tour of Britain winner, was injured in Craven Arms the other day, a road which earlier claimed the life of a bike rider.

So what is the solution? It is easy to say, but not easy to do – separate the cyclists from the cars and lorries.

Even in a new town like Telford (UK), which was built with dedicated cycle paths, the network is a hotchpotch, where you can get from A to B, but if you want to get to C you will have to break out onto the roads.

Until towns are given a cycling network to match the road network, which will be never, the primary responsibility for safety rests with motorists who need to be cycle aware – and give cyclists space.