Celebrating your birthday by dedicating it to road safety - The Gambia

Birthdays need no explanation, they are celebrated in nearly every culture worldwide as an auspicious occasion. When you're average youngster turns 25, they often get their friends together, have a party, drink some beers and cut a cake, but not Siaka K Dba but then Siaka is not your average 25 year old. He set a new precedent for socially conscious young people by dedicating his birthday to road safety. Read about it here.

Siaka K. Dibba is a Social Justice Activist from The Gambia who has great passion for Road Safety, Women and Children's rights issues. 22nd February 2013 Siaka turns 25years. As an activist he chooses to celebrate his birth in a unique way.

A birthday is a day when a person celebrates the anniversary of his or her birth; it marks an addition to ones age and celebrated in the form of party and gift giving. Well as he grew +1, he dedicated his silver jubilee to Road Safety.

One might ask why road safety instead of a party and cutting a cake? The reason is not far-fetched; road crashes are the leading killer of young people globally.

More than 1000 young people die every day and thousands more are seriously injured. Every single act could contribute to reduce the statistics and make the world's road safe. As a result of the above, Siaka raised a fund through friends/family and also his monthly earning to support crash victims at the Gambia Teaching Hospital-Royal Victoria Teaching Hospital Banjul.

Siaka and the organizing committee of the birthday action visit a hospital in Banjul.

The social justice activist who is the Program Officer of National Youth Parliament of The Gambia and also an executive member of Your Change For a Change (YCFaC) on the 22nd February accompanied by musicians, youth leaders, hospital management and religious leaders visited Royal Victoria Teaching Hospital, Gambia's #1 Hospital to meet road crash victims. During the visit the delegation had the opportunity to present gifts in the form of food items, pay hospital bills for those who could not afford them, pray for them, and learn their stories in terms of the impact of the road crash they have been involved in and also donated blood at the blood bank.

At the end of the visit, Siaka thanked God Almighty who have given him the strength, health and wisdom for the past years, his parents and entire family for supporting all throughout to raise to a responsible adult. Friends in The Gambia and outside denied themselves a family size pizza and a party to support this initiative. He called on all to drive with care, for the life saved could be theirs as well as that of other. He also informed the delegates about two new campaigns "Long Short Walk" which is a unique campaign calling for pedestrian safety across the world initiated by 'Zenani Mandela Campaign and Road Safety Fund' and the "Global Road Safety Film Festival" organised by LASER International in partnership with Youth For Road Safety. He encouraged them to come on board to participate for The Gambia, Africa and the world at large to save lives. 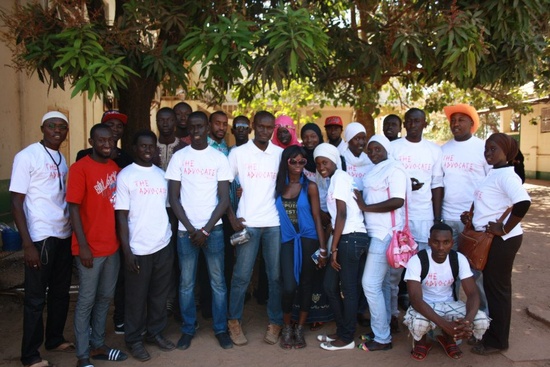 The young people involved in making the day a success wear Siaka's 'The Advocate' t-shirt.

Do you want to celebrate your birthday in a more meaningful and productive way? If your answer is YES, then BIRTHDAY SPACE on Facebook is the space for you to join and let us know. We have a team with wealth of experience to help you organize, raise funds and do the logistics... Together we can! Your Little Change can Change the WORLD! Good idea? Would you do this for your birthday? Let us know!

World Crossing Campaign Winner from YOURS on Vimeo.