Utah transportation officials call the three months between Memorial Day and Labor Day the state’s “100 Deadliest Days,” because of a surge in highway deaths that regularly occur when residents take summer trips. The fatality rate is 35 percent higher during that time than during the rest of the year.

Utah officials are also worried because the number of traffic fatalities in the state, which hit the lowest point in half a century in 2012, has been inching up for the last two and a half years. So this summer, Utah will begin a tactic that’s increasingly popular among transportation agencies: Using electronic highway signs to display catchy, and sometimes even funny, messages to make motorists focus on highway safety.

Every Monday, it’s a new message. One week signs displayed “Steering wheel: not a hands-free device.” Another week, they showed “Turn signals: the original instant message.” To discourage speeding, the agency used “It’s not a race, leave some space.”

An electronic highway sign in Massachusetts that plays off the regional dialect.

The lines alone won’t get Utah to its goal of zero road deaths, but officials in the state -- like their counterparts elsewhere -- hope the messages will get people talking and thinking about highway safety.

“I don’t know that anybody is going to say that an electronic message board is going to change the world, but it can be part of that plan,” said John Gleason, a spokesman for the Utah Department of Transportation.

A study commissioned by the Federal Highway Administration shows that drivers in four cities responded positively to more straightforward safety messages, such as "Click it or ticket" and "Slow down, save a life." Survey respondents said the on-road messages would be more likely to change their behavior than messages shared in other media, such as TV commercials. The study did not track drivers' actual behavior in response to the signs. The messages were less effective for younger drivers, those with lower education levels and those who received a ticket or were in a crash in the last five years, according to the survey.

Utah launched its effort this spring with “That seat belt looks good on you,” which is still the message that received the most positive feedback. The state only displays the safety messages on Mondays, but it also shows the year-to-date count of road deaths every Friday.

Gleason said Utah got the idea, along with some of the messages, from other states. Massachusetts, for example, got a lot of attention last year for a campaign that played off of the regional dialect, with signs such as "Changing lanes? Use yah blinkah" and "Make yah ma proud, wear yah seatbelt." 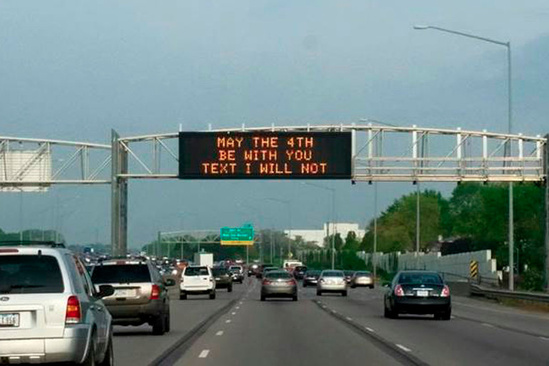 An Iowa highway sign alludes to Star Wars in a message displayed on May 4. (Iowa Department of Transportation)

Iowa began posting safety witticisms nearly two years ago. It’s taken inspiration from pop culture (“May the 4th be with you. Text I will not” on Star Wars Day) and used humor (“Get your head out of your apps”) to get its points across. One of the most popular messages, though, succeeded on its content and clever formatting (“Pass on left; drive on right,” with the message divided accordingly).

“What we found is that the more popular ones are the ones where we’re pushing the envelope a little bit and not sounding like a government agency,” said Andrea Henry, a spokeswoman for the Iowa Department of Transportation.

Iowa, like Utah, focuses most of its messages on five driver behaviors: distracted driving, sober driving, drowsy driving, seat belt use and speeding. But the agency will also address seasonal topics, such as work zone safety and awareness of pedestrians and cyclists.

Iowa road deaths in the last two years, while the Transportation Department has displayed the signs, are lower than in prior years. At this point it's impossible to say how much of a role the messages played in that decline, but Iowa recorded 365 road deaths in 2012, compared with 317 in 2013 and 321 in 2014. 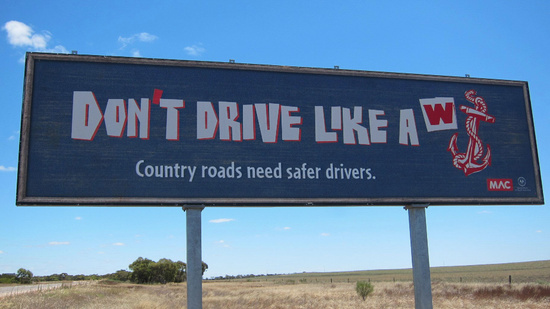 In some parts of the world, such as Australia - a more direct approach has been undertaken, with some humour.

“Our more attainable goal is to get recognition in people noticing the boards, talking about the boards,” Henry said. The agency hopes the messages will “enter [drivers’' consciousness as they’re getting behind the wheel.”

The Illinois Tollway, which operates a number of highways primarily in the Chicago region, asked residents this spring to propose safety messages and then, using an online vote, to choose which ones would end up on electronic message boards. More than 22,000 people participated in the contest.

“The new safety messages have only been displayed along our roadways for about two and a half months, so it’s too soon to have any measurable results,” said spokesman Dan Rozek. “But the contest in and of itself was successful in focusing media and public attention on the public safety challenges.”

Raed about humour in road safety
Original article at: Governing