Can Mumbai shed its reputation as the ‘car crash capital’?

Tuesday, 3 January 2017, YOURS News adapted from The Guardian: Cities in Motion

One person is killed on Mumbai’s roads every 15 hours. In an attempt to get a grip on the chaos, the police are going digital – recording fines electronically and installing CCTV. But will it stop people taking risks?  WHO estimates 207,551 deaths on the road in 2013 (Global Status Report on Road Safety, 2015) with 16.6 deaths per 100,000 citizens in the country. Compared with European countries such as the UK that currently operates at 2.9 deaths per 100,000 citizens, India still faces a road safety crisis.

For 30 minutes after she was hit, Archana Pandya lay bleeding on a road in the busy Mumbai suburb of Goregaon. The 22-year-old, who had just started a new job, was on her way home from work when she was the victim of a hit-and-run. She died of her injuries. “There were a lot of people there, and it happened right opposite a police station, but no one came forward to help,” says her brother Siddharth Pandya. “It’s not the roads; in India, it’s the people that are unsafe.”

Pandya was one of 586 people killed in road accidents in Mumbai in 2015, the equivalent of one death every 15 hours. Another 2,034 were seriously injured. The long response times of ambulances and emergency vehicles, coupled with the unwillingness of bystanders to help road victims for fear of being detained by police and hospitals, contribute to slow, painful deaths for hundreds of people every year. As a result, Mumbai – a city with roughly the same number of cars as London, but more than four times the number of road fatalities – has become known as India’s “crash capital”. In 2015 there were 23,468 recorded traffic collisions: the highest in the country. 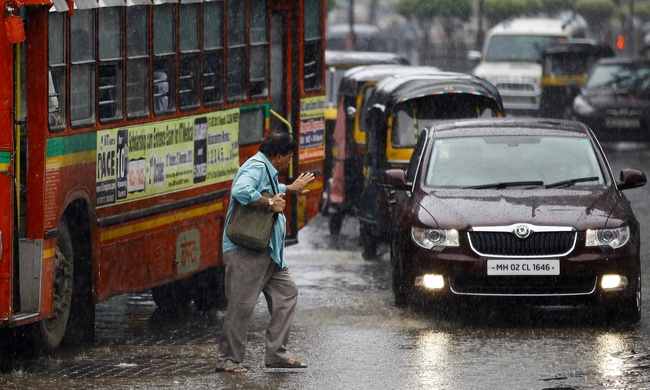 Mumbai has the highest density of cars in India. Photograph: Alamy

The city’s urban geography has helped breed a culture of reckless driving. Cars zigzag through dense traffic jams, cutting lanes, overtaking from the left or zipping past red lights. Drivers know that the penalties are small and the chances of getting caught are low. Many scoff at the idea of wearing a seatbelt, while others casually take phone calls and answer text messages as they navigate through the maze of cars.

These lax attitudes and dangerous driving habits are spawned right from the driving test, which exists mostly as a formality and is easily smoothed with a small bribe. Aditi Deopujari, a Mumbai resident who got her driving licence in 2000, explains: “I was part of a driving school that had a setup with the Motor Vehicles Department [which issues licences]. I showed up and had some practice rounds, but never had to sit the exam or had any written test regarding the rules. I just got handed the licence.” Another resident, who asked to remain anonymous, says: “I literally had to drive five metres forward, and then five metres reverse. That was it, I passed.”

In an attempt to get a grip on the chaos, Milind Bharambe, the head of the traffic police, is presiding over a new traffic control experiment. The city has given all traffic cops electronic devices to issue fines, and has installed 4,000 CCTV cameras at junctions and signals. “After five violations, we are going to start taking away licences,” says Bharambe, whose plan to digitise the traffic control system takes cues from Prime Minister Narendra Modi’s “digital India” programme.

“Watch,” says police officer Prashant Prabhu, motioning towards a traffic light at a busy junction on the Mumbai marina. Across the road, the light is about to go from green to red. But just as he predicts, cars accelerate through, hoping to cross the signal as the yellow flashes. Some keep driving even after the light goes red.

“Signal jumping is the biggest offence at this junction,” he says. “Everyone thinks, the light has just turned red, let me try to get through. Nobody wants to wait.” 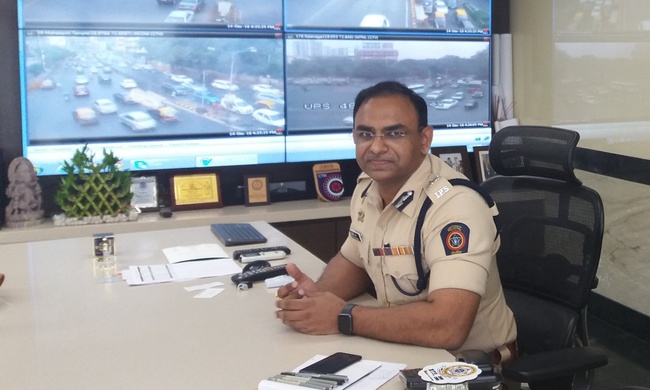 Milind Bharambe in his office

Prabhu jumps out and flags down a motorbike that has just sped through the red light. He asks for the rider’s licence, then pulls out a calculator-like device, and fumbles trying to enter his password into the new machine. Eventually he punches in the licence number and asks for a credit card to pay the 200 rupee (£2.40) fine.

“Sometimes people refuse to give their driving licence. OK, no problem, we just put their licence plate number into the machine, and it will automatically send a fine to their phone,” he says. “This way we have a record of all the traffic offences each driver has committed.”

Until last month, traffic fines for even the most serious errors were issued on paper, with no way to check if a driver was a repeat offender, says Baharambe. “We’ve been running the programme for just one month, and already we’ve given out over 150,000 fines.”

Bharambe seems a credible candidate for the huge task of modernising Mumbai’s archaic traffic policing system. His office walls feature images of the Hindu elephant god Ganesh as well as live streams of CCTV footage from around the city; on his wrist is an Apple watch. He has a black belt in karate, a 10-year winning streak in state-wide shooting competitions, and a solid record as a policeman – his achievements include setting up the rapid response team during the Mumbai terror attacks of 2008. And he has a history of introducing tech-based initiatives as superintendent of police in Sangli and Thane, two cities near Mumbai.

As well as digitising traffic offences, his plan includes the more analogue solution of new hydraulic towing vans, which can move 4x4s – until now, SUVs that had been badly parked or involved in collisions had to be left on the road until their driver moved them. He has also invested in digital signboards to warn about roadworks or accidents. “This is the first time that something like this is being done in the country.”

One floor below Bharambe’s office, Kishore Shinde, the traffic police’s first head of multimedia, is checking on pairs of uniformed police officers – these are the officers tasked with using the new CCTV cameras to issue tickets and fines remotely. Shinde also oversees a new complaints system, which receives more than 300 messages from frustrated drivers every day.

“The biggest issues are traffic jams, no parking, accidents, and oil spills on the road,” he says. “We’re making all the fines cashless, so drivers can pay via credit card or mobile phone. We know there is corruption and bribery even in our own department, like there is from top to bottom everywhere in India. But once you pay by credit card, that means we have a record of the transaction. No police officer can just take a cut for themselves.”

Although digitising Mumbai’s traffic operations is a significant shift that could improve efficiency and reduce corruption, Siddharth Pandya, brother of Archana, doubts it will have much impact on the death toll. “Nothing has changed,” he says. “Many of the CCTVs police installed before are not properly maintained or don’t work, so why would it be different now? Where Archana was killed there was a CCTV camera, but it was broken, so we never found out who hit her.”

Bharambe, for his part, argues that Mumbai’s collision statistics look worse than other Indian cities because the Mumbai police are better at recording accidents. He argues that Delhi has four times as many vehicles as Mumbai but barely records any no-injury accidents, in a deliberate effort to keep crash statistics low. He also points to mismanagement, corruption and red tape within a complex web of urban planning authorities. “We have to keep cleaning up their mess,” he says. 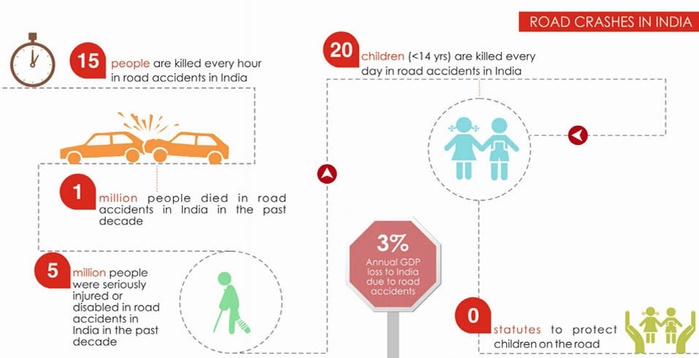 Harish Wahi, director of road safety NGO Equal Streets, thinks that the city’s traffic problems run even deeper.“South Bombay was built in British colonial times, and all of new Bombay has taken shape very quickly, post-1980s. Because of the speed of that growth, the planning and quality of roads has gone. On top of that, pavements are encroached upon by hawkers or shops, so pedestrians have no choice but to walk on busy streets.”

Prabhu, the traffic cop on Mumbai’s marina, says police are blamed unfairly for road deaths. “I am literally on my feet the whole day. I barely sit down. The problem is the public doesn’t want to drive properly – they just want to reach their destination as fast as possible.”

Bharambe admits that his digital drive is only like to reduce deaths by a small fraction. “The people also have to take some responsibility,” he says. “Look, two years ago, none of the people on motorbikes were wearing helmets. Now, since we’ve started enforcing [helmet wearing], you’ll see most of the drivers have their helmets. But you’ll still see men who are driving their motorbikes wearing helmets themselves, but the wife and children sitting behind them are not. Now tell me, if people themselves are taking such risks with their own family’s lives, then what can we do?”