Brian's Column: Why are road crashes reported like normal occurences?

Our regular monthly columnist Mr Brian Bilal Mwebaze is back with his take on all things youth and road safety in Africa. This month, he places a focus on journalism and road safety in the media. A time where road traffic crashes remain the biggest killer of youth, he stresses that news should stop painting crashes to be an normal occurance but rather an investigative journey into prevention.

So, Johnson-the Lizard asked his wife for a surprise visit to his grandparents who lived in a one roomed grass thatched house overlooking the feet of Mt. Kilimanjaro, the highest mountain in Africa. Night fell, and by midnight, it was getting hotter!  Mrs. Johnson, turning to his snoring husband said in an irritated voice, ‘You, this house is toooo hot!’ The husband, seemingly entering the second half of sleeping mode retorted ‘It has always been hot here. Leave me alone!’ This was no ordinary heat; the hut was burning for real. Atleast, they survived with 2nd degree burns. They had taken business as usual. Road Safety Communication can’t afford to be like this, not anymore!

The WHO released New 2015 Global Status Report on Road Safety sadly noting Road traffic injuries remain the number 1 cause of death for people aged 15-29! Download the full report here.  But, have you thought about how road traffic crashes are reported in your country?

These headlines do not shed any light on what caused the crash for example. What was the risk? Was the driver speeding or driving under influence of drugs? Was the car overloaded? Was it a road design issue? Or was it God’s plan? I mean, come on! By not publicly answering such questions in the headlines, the real root causes of road traffic crashes remain hidden from you, me and decision makers.

How are your journalists reporting road safety?

Also, do you notice that most road safety articles are born when a road traffic crash has already happened? Where are the ‘investigative’ reporters who could report on the dangerous parts of our roads, dangerous road safety behaviors and actions by all road users? Or even sought and aired some experts’ views on the worrying trends of road traffic crashes in our neighborhoods? There is consistently less attention to disseminate in detail WHY a certain road traffic crash occurred.

Of great concern too is that none of the headlines above relate the road traffic crashes mentioned to previous crashes. For example, a follow up effort should have been made by now to disseminate what happened to the victims or relatives of road traffic crashes, did they get justice? Were they compensated? Or did the traffic police or concerned parties ever investigate the issue fully in the first place? By continuously reporting these stories as single, episodic events, we’re not able to get the attention, this preventable serial killer deserves. 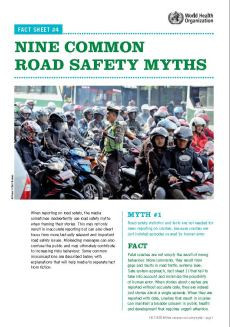 As WHO notes, Road traffic crashes are often covered in the media simply as events—not as a leading killer of people and an enormous drain on a country’s human, health and financial resources. By framing road safety as a health and development story, with data and in-depth information, journalists have the opportunity to affect the way these stories are told and potentially to help shift public behavior and attitudes, influence policy and therefore contribute towards saving lives.

Perhaps, it’s time all journalists acted and started to download and share the WHO Reporting Guide on Road Safety as well as a Road Safety & Media Reporting Brief We can do more and better. #StaySafe