This month, our regular columnist Brian is back on all things youth and road safety in Africa. This month, he turns into a storyteller explaining how it doesn't take a huge gesture to make your mark but even simpler, take part in #SaveKidsLives and forward on the Africa Champions opportunity!

All your yearlong prayers have been answered, it’s Christmas! Christmas, without a doubt, the most celebrated season in the World! The closest could be your birthday: The time to chillax with family friends and loved ones, time to re-negotiate your life contract with God, and yes, a time to get outta routine work! This will most likely involve us to move long distances, possibly buy new car, get gifts including wines, Galaxy Tablets, Beats By Dre Head Sets as well as new pets. Look, I won’t fail to mention too that there’re a lot of cars on the road too thanks to bridal entourages! Hehe!

But would you like to remember signing out of 2014 on a safety note?

There is an African story told of long ago by the gods: Once lived a poor old man on the periphery of his local village’s square of influence. He had no dog, no family and he had no cat in hell’s chance of being remembered. He had no lineage and identity. So, one day, he called all the village mates and sent word to the local chief that he was at the brink of death but had one more mission to do. And as you can imagine, the local Chief announced that he’d spend a few minutes with this old man-whoever he was.

The next day, the poor old man got his axe, chisel, hoe and a panga and descended on demolishing his latrine (toilet) like a bulldozer would do. The whole village, looking on with amusement, held their breaths as the poor old man put the latrine down. They couldn’t believe their ears when he told them he didn’t need any help as he commenced to dig another hole 30m near the road that connected this local village with the next village. In 7 hours, he was done with the hole! And did he stop at that? No way, he carefully started on construction of a new local latrine which he finished before sun set. He dedicated this latrine to the whole village. But this wasn’t just a latrine! It was a damn good record latrine built in one day! And the latrine would be used the passersby to the next village during market days, church and mosque times, and the gods would be happy with him.

The bottom line, you don't need to do what the old man did to make a real difference:

It takes just less than 2 minutes to sign the Child Safety Declaration: Set your new record here: http://www.savekidslives2015.org. Every day more than 500 children lose their lives in traffic crashes globally. Thousands are injured. Support the campaign by signing the declaration. Together we will make a call for action on road safety! Seriously! By signin your name, you are supporting the legacy of the campaign and your name will delivered to decision makers all around the world. Oh and don't forget to take a #Safie like I did: 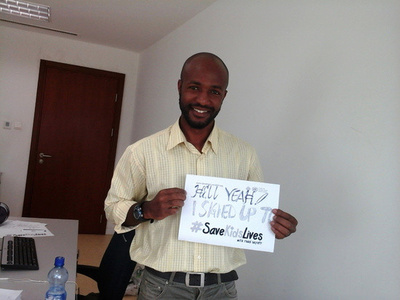 Share this opportunity amongst young people you are working with:

YOURS is proud to announce to establishment of the National Youth Champions in Africa, which will be headed up by me:

Observe safety during Christmas season. You know what to do right? Stay safe and see you in 2015!