Brian's Column: Get road safety on the agenda - development depends on it!

Its again that time of the month when I knock on your door just to be sure that you are alive! October is here! Those still suffering from ‘Wake Me Up When September Ends Syndrome’ can now wakeup, fasten their seatbelts, as we set our quest to define our present and future!

So, I will go straight to the point…as African youth leaders, we’ve set a remarkable trend in road safety at the continental level: In 2007, at the World Youth Assembly for Road Safety, Geneva, Switzerland, where youth leaders from more than 100 countries called on community-based organizations, private companies, media, celebrities and the entertainment industry, parents and guardians, educational institutions, community leaders and policy makers to declare ‘Road safety is no accident’, In November 2012, we also made another declaration at the launch of the Caravane Project in Niamey, Niger.

Read all of our youth and road safety declarations in one place.

Now in Africa, I was back in my mother country Ethiopia where for 2 days a Youth Pre-Conference to the Africa Conference on Population and Development, also known as ICPD saw around 200 youth representatives gather in Addis Ababa from 24 – 25 September 2013 to identify their priorities for population and development agendas beyond 2014. The outcome of the youthful meeting was presented as a set of recommendations for the experts and ministerial segment of the African Regional Conference on Population and Development which was taking place in the same city throughout the week.

“Governments need to increase investments into research and population data to inform design and implementation of rights-based health interventions for young people, in particular marginalized groups…Ensure appropriate allocation of the health budget, especially to adolescent and youth SRH programs,” read the Outcome of the Youth Pre-Conference to the Africa Conference on Population and Development (ICPD).

This was clearly a chance for African youth leaders to advance the war on avoidable Road traffic injuries: While the African youth leaders, indepthly discussed a number of pertinent issues including sexual and reproductive health and rights, education, youth employment, family planning and maternal mortality as well as inclusive participation, security and governance, surely, for God’s sake, the leading cause of death among young people aged between 15 and 24 should have stood out from the crowd.

Many African youth leaders have championed the road safety cause but more needs to be done.

Part of the recommendations was an appeal to the world to invest more resources in young people and ensure their human rights in order to promote socio-economic development and growth with equal access for the youth to health, education and economic opportunities doubling the potential for development and helps societies to break the cycle of poverty which is still prevalent in Africa. Does this sound familiar to you? Have you heard about the economic implications that arise from avoidable deaths and disabilities arising from road traffic crashes? 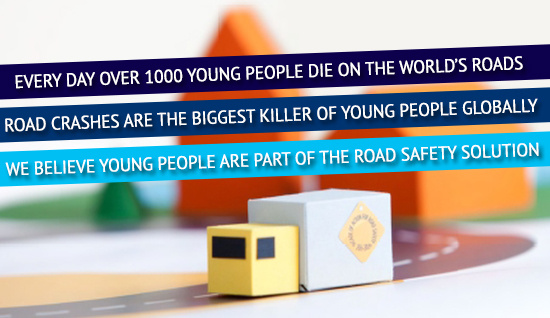 The statistics are clear; road traffic crashes are a serious development issue but sometimes overlooked. Read more about the stats here.

As Mr. Hassan Yousif, Representative of the Human and Social Development Division of the UN Economic Commission for Africa (UNECA), reminded the gathering that Africa is the youngest continent with a majority of its population below the age of 30 years:-noted that addressing their concerns in terms of “education, health, employment, inclusive participation, governance and security, remains one of Africa’s priorities.”

Robert Nkwangu, a member of the African Youth Panel (AYP) Steering Committee and Eastern Africa Focal Person, appreciated inclusion of the youth in decision making as the best way to address youth issues governments in the region having made a significant improvement regarding consultations with youth in policy making although young people still do not have a seat at the decision-making table. That could have been a confounding factor to the absence of strong faces of road safety.

Read why road safety should be a Post-2015 Development Goal

Citizens of the world's youngest continent, African youth represent an enormous development resource for the region their priorities are aimed at ensuring that their potential is released to drive sustainable economic development, but this can only happen when they are alive! Clearly, there is still a lot to do, to bring road safety to the faces of decision makers: another reason why we shouldn’t sleep! While road safety may have not appeared top on the agenda of the Africa ICPD conference, it remains a silent assassin and there is no way sustainable development can be realized without it! Sometimes, road safety is not seen as ‘the in’ Are we enemies of our own? Are you? STAY SAFE!