I think we’re sick and tired of mentioning road traffic injuries to be the eighth leading cause of death globally, with an impact similar to that caused by many communicable diseases, such as malaria. Sadly, they are still the leading cause of death for young people aged 15–29 years; a fact that should scare the hell outta you noting the heavy toll road traffic crashes have on us as we announce our arrival in our most productive years.

Africa continues to have the most dangerous roads in the world, with the risk of death from road traffic injury being highest on the continent (24.1per 100 000 population), and lowest in Europe (10.3 per 100 000). Road Traffic Crashes play the chameleone game most often finding us in places where we obviously chill. Half of the world’s road traffic deaths occur among motorcyclists (23%), pedestrians(22%) and cyclists (5%) – i.e. “vulnerable road users” – with 31% of deaths among car occupants and the remaining 19% among unspecified road users.Young adults aged between 15 and 44years account for 59% of global road traffic deaths and more than three quarters (77%) of all road traffic deaths occur among men (WHO, 2014). 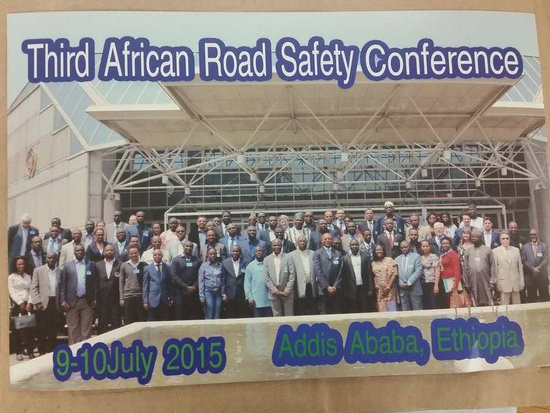 After a lot of negotiations, and convincing the organizers, I was invited to participate in the Mid-Term Review of the African Road Safety Action Plan from 9-10 July 2015 in Addis Ababa, Ethiopia; an event that was better publicized as the #3AfricaRS on social media and Third African Road Safety Conference in traditional media. But, how have young people been meaningfully involved at Continental level in road safety activities? The jaw dropping question is, ‘What impact have we achieved?’

Perhaps, the most remembered event is the African Road Safety Conference that was held in Accra, Ghana in February 2007.   The conference made several recommendations related to road safety institutions; data; education; management; policy harmonization; partnership and collaboration. The recommendations also covered rural road safety; national road safety targets; as well as actions that were considered as “quick wins”, particularly the enforcement of road safety legislation related to speed control, drink-driving, and use of helmets, among others. No pre-conference youth consultation was conducted.

But, young people’s voices begun to be heard at the African Regional Road Safety Seminar that was held in Dar es Salaam, Tanzania in July 2009 on the theme “Setting Road Safety Targets: A Way Forward for Reducing Accident Fatalities by Half by 2015” . This was a great milestone in road safety management in Africa as it developed and adopted targets and indicators to help track the implementation of the Accra recommendations. Young people’s participation in this event was partially as a result of the global preparations for the Youth Meeting on 18 November 2009 that culminated into Youth Declaration Moscow.

In the Second African Road Safety Conference, held in Addis Ababa in November 2011, which developed the Action Plan for the Decade by aligning the Accra recommendations and the Dar es Salaam targets and indicators with the 5 Pillars of the Decade:-about 12 young people participated. This was also catalysed by the first African Youth Assembly on Road Safety held in Niamey Niger. Needless to say, Youths for Road Safety earlier this year appointed Youth Champions for Road Safety in Africa in 14 African Countries.

Back to #3AfricaRS, organized by ECA in collaboration with the African Union Commission (AUC), African Transport Policy Programme (SSATP), the Global Road Safety Facility of the World Bank, the African Development Bank,the International Road Federation (IRF) and other partners, the conference aimed to ensure the effective participation of Africa at the mid-term review of the UN Decade of Action 2011-2015 Decade to be held in Brasilia in November 2015. African Young people do not have a clear structure to be in this global meeting and our participation may depend on luck herself. This shouldn’t be the case, as youth mainstreaming in road safety shouldn’t be undercooked.

However, these are issues that we might not be able to change immediately. African Young leaders in road safety must go back and act locally with public, private, academia partners to realize immediate impact especially in fields of Education as well as especially advocacy in the fields of Engineering and Enforcement for better roads. While a young person may not be enabled to participate in a high level meeting, he/she has the ability to turn his guns to his/her peers, hood, school, or University to make a difference. Procrastination shouldn’t be in our wardrobes. Let’s ACT MORE LOCALLY. #StaySafe