Our CORE Group Representative for Russia Mr Alexander Revskiy gave us an update on new road safety campaigns launched in Russia in 2013. The campaigns incorporate robust road safety messages alongside iconic cultural branding such as the globally recognised matryoshka doll. We check out some of the great examples of innovative road safety campaigns coming out of Russia this year

The General Department of Road Traffic Safety of the Ministry of Internal Affairs of Russian Federation and the NGO Road Safety Russia recently launched their new nation-wide public awareness campaign, “Above all, wear a helmet!”. The campaign aims to improve the safety of drivers and passengers of motorbikes and scooters and advocates the compulsory wearing of helmets for all journeys.

This campaign is coming at the height of the motorcycling season. According to statistics in the first five months of 2013 there were 1,944 motorcycle and scooter accidents in Russia, in which 253 people died and 2,184 were injured. One way to reduce the fatality rate among drivers and passengers of two-wheeled motor vehicles is to make the wearing of safety helmets compulsory. The use of safety helmets can reduce the risk of fatal injury in the event of a road traffic accident by 40% and the risk of serious injury by over 70%. 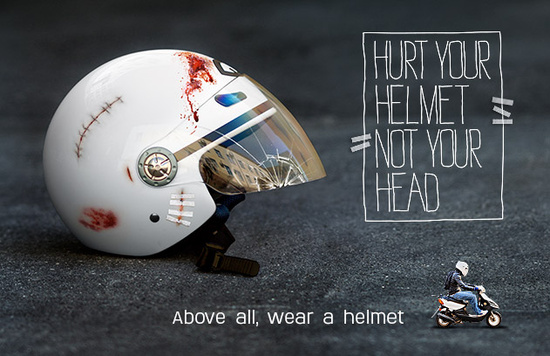 The “Above all, wear a helmet!” public information posters have appeared throughout Russia. The organisers will prioritise universities and colleges, driving schools and motorbike and scooter clubs.

It was launched officially with a “Scooting by the Rules” event in Moscow’s Sokolniki Park. Everyone taking part or coming to watch the event had the opportunity to see the public information posters, “Hurt your helmet not your head”, which have been produced as part of the “Use your head, wear a helmet” campaign.

The campaign also reiterates the need for a system of training for learner drivers and for the establishment of special driving schools to provide advanced driving skills courses for motorcyclists and scooter riders. At the end of September there were more than 1000 publications about the campaign and different regional activities within it, which were organized by local departments of Road Traffic Safety.  The next year Road Safety Russia is planning to repeat this campaign extending the communication channels and its activities. 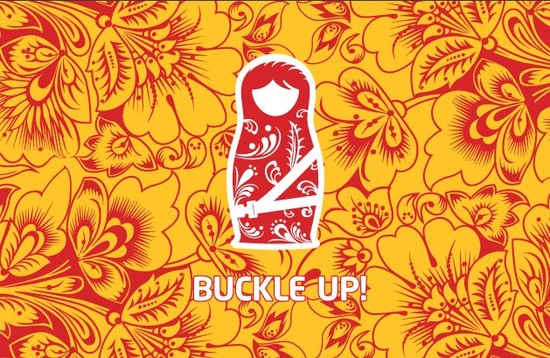 Other cultural campaigns include the use of the Russian 'Matryoshka' to promote seatbelt use.

Surveys of more than 50,000 people have revealed that only half of the Russian population always use a seat belt. Furthermore, even although back seat passengers are just as vulnerable in the event of an accident as the front seat occupants of a vehicle, the Russian Public Opinion Research Centre (VTsIOM) has found that only 17% of back seat passengers always use their seat belts.

he symbol of the “Buckle Up!” campaign is the matryoshka, Russia’s most famous and recognisable image. The matryoshka is a symbol that unites the diverse traditions of the inhabitants of Russia, just as roads connect people, cities, towns and villages, unifying Russia economically and socially.