7th PIN Report: Road crashes in Europe are down with more to be done

The annual  report from Road Safety Performance (PIN) Index conducted by the European Transport Safety Council (ETSC) is out and highlights that road traffic crashes in Europe have been reduced by 9% in comparison to 3% in 2011. While many lives have been saved, there is still much more to be done, especially in tackling the disproportionate amount of males being killed on the road.

“In 2012 we had 2,661 fewer road deaths in the EU than in 2011. The progress we have seen in 2012 is encouraging and we urge governments and  stakeholders to keep up their efforts in order to further improve road safety and eventually reach the EU road safety target for 2020,” said Antonio Avenoso, ETSC Executive Director

A total of 27,700 people were killed in the EU27 as a consequence of road collisions. Around 313,000 were recorded as seriously injured and many more suffered slight injuries. Following disappointing results from 2011, the year 2012 brings a welcome contrast as 27 out the 31 countries monitored by the PIN Programme registered a drop in the number of road deaths. Frontrunners are Malta and Cyprus followed by Israel and Denmark. But road deaths increased in Switzerland, Luxembourg, Lithuania and Romania.

There have been 2,661 fewer road deaths in 2012 than in 2011 in the EU as a whole. The monetary value of this reduction is estimated at 5 billion Euro. For the EU to be reaching the 2020 target through constant annual progress, another 600 deaths would have had to be saved over the 2011- 2012 period.

Just under 30,400 people were killed in 2011 in the EU27 in road collisions, approximately 7,200 females and 23,200 males. Females account for 51% of the total EU population but only 24% of road deaths. This percentage has changed by only one percentage point since 2001, but the reduction in female deaths since then has been four percentage points greater than the reduction in male deaths. Males account for 76% of people killed on the roads in the EU in 2011. 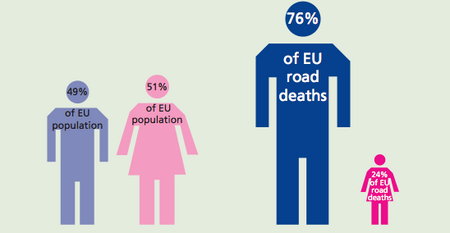 The PIN Report illustrates that while women make up 51% of Europe's population, the death of men is at 76% in all crashes.

In the EU on average 95 men are killed on the roads each year per million male population, compared with 28 women per million female population. Males have more than three times the death rate of females on the roads in the EU. Hypothetically, if all EU road users used the roads like females in their respective countries do now, the road mortality rate across the EU would be about 20% lower than the average for the SUN countries, and even in the countries with the highest road mortality it would be no higher than it is in Germany now. Males are killed on the roads mainly as car drivers and motorcycle riders while females are killed mainly as pedestrians and car passenger.

Why is this the case?
There is extensive evidence to show that men have a higher rate of collisions than women. The difference between the sexes in terms of the number of deaths resulting from road collisions is similarly marked. Chipman et al (1992), for example, show that men have double the number of collisions (per 1,000 drivers) than women. Waller et al (2001) also note that in addition to having a higher number of collisions, men incur their first collision earlier in their driving career and are more likely than women to be held to blame for the incident. Norriset al (2000) and others attribute this greater level of collision-proneness to higher driving speeds among men and less regard for traffic laws. Male drivers seem to be more prone to risky driving behaviour than female drivers. In the UK,for example, Home Office statistics show that in 2002 88% of all recorded driving offences, and 83% of speeding offences, were committed by men.

What can be done for young people?
Understanding the risks faced by young road users is important in order to plan appropriate programmes to reduce road traffic deaths and injuries among young people. Most of the interventions that reduce the risk of road traffic injuries among the general population will also reduce the occurrence among youth. In addition, experience from high-income countries shows that sustained efforts to implement interventions targeted specifically at young adults can lead to great success in reducing the numbers of deaths and injuries among young people.

In conclusion young people are difficult to reach. Parents will have less influence on them and authorities like the police are often involved when it is already too late. To connect with young people you have to speak their 'language' but remain credible and authentic. Therefore YOURS believes that it is young people themselves who should talk with their peers and get the right message across. Many examples of peer-to-peer communication have been set by youth-led NGO's and are part of the YOURS network.

Governments, private sector and media should help young people by providing resources, help developing their skills and give media attention to their efforts.

You can read the PIN Report here or download it in the attachments alongside reading extra information from ETSC.