This year the World Day of Remembrance for Road Traffic Victims (WDR) is commemorated on Sunday 16 November. This day we remember the many millions killed and injured on the world's roads. Together with their families and many others also affected, as well as reflect on the tremendous burden and cost of this daily continuing disaster. Join us.

For the 21st time since 1993, the Day of Remembrance of Road Traffic Victims will be remembered at a global level, and have reached the 10th Anniversary since being recognized by the UN General Assembly in 2005, and supported by the World Health Organization.

For years this Remembrance Day was mainly observed in Europe but as it is now listed as an international activity during the Global Decade of Action for Road Safety, celebrations are held on every continent, in particular in those fast developing countries that today bear the bulk of road deaths and injuries.

Find out how you can join on the official web site: http://worlddayofremembrance.org/. You can see all global activities by clicking here, in case you would like to attend.

This years' theme is: "Speed Kils, Design out Speeding". This is the poster that supports the campaign: 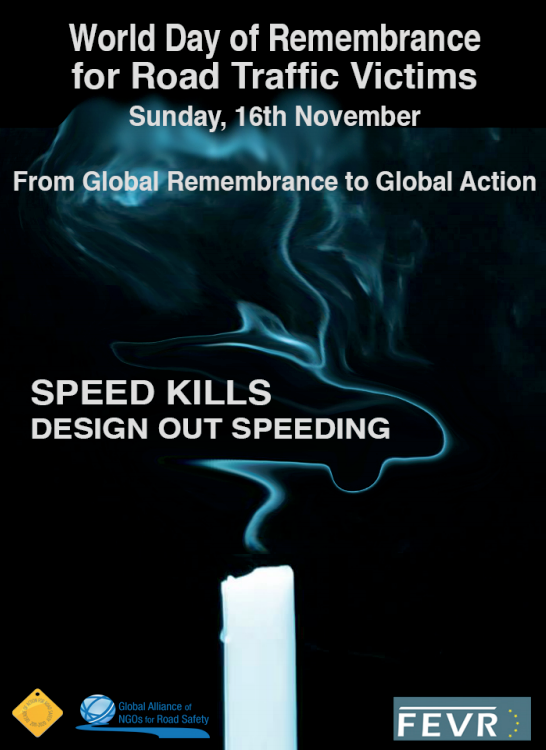 Why a World Day of Remembrance?

The World Day of Remembrance for Road Traffic Victims (WDR) is observed on the third Sunday of November each year by an increasing number of countries on every continent around the world. This day is dedicated to remembering the many millions killed or injured in road crashes and their families and communities, as well as to pay tribute to the dedicated emergency crews, police and medical professionals who daily deal with the traumatic aftermath of road death and injury.

Why is there a need for this day?

Road deaths and injuries are sudden, violent, traumatic events, the impact of which is long-lasting, often permanent. Each year, millions of newly injured and bereaved people from every corner of the world are added to the countless millions already suffering as the result of a road crash.
The burden of grief and distress experienced by this huge number of people is all the greater because many of the victims are young, because many of the crashes could and should have been prevented and because the response to road death and injury and to victims and families is often inadequate, unsympathetic, and inappropriate to the loss of life or quality of life.
This special Remembrance Day is intended to respond to the great need of road crash victims for public recognition of their loss and suffering (see Messages & Thoughts from victims).
This day has also become an important tool for governments and all those whose work involves crash prevention or response to the aftermath, since it offers the opportunity to demonstrate the enormous scale and impact of road deaths and injuries and the urgent need for concerted action to stop the carnage.